When Is Orthodox Good Friday 2022? Know Date, History, Traditions and Significance of the Day Marked by Greek Orthodox Christians

Greek Orthodox Churches mark the crucifixion of Jesus Christ as per the dates mentioned in the Julian Calendar. The day is known as Orthodox Good Friday which will be observed on the 22nd of April, this year. The main tradition of Orthodox Good Friday is the religious service, which includes liturgies and Gospel readings. 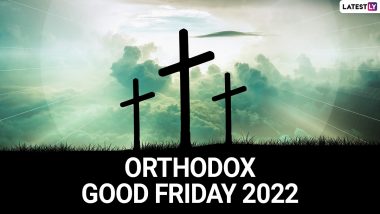 Orthodox Good Friday goes by many other names such as Great Friday, Holy Friday, and Holy and Great Friday that is marked as per the dates in the Julian Calendar. The occasion is a strict day of fasting for Greek Orthodox Christians in the United States. The day is celebrated as Good Friday on the date that proceeds the date of the Gregorian Calendar which is followed by some Western Churches. Many Orthodox churches retained the Julian calendar after the Gregorian calendar was introduced in Europe in 1582. Therefore the Orthodox Churches often follow a different Easter date compared with many western churches. That's why Easter days like Good Friday are known as “moveable feasts” as their dates change according to calendar calculations. Orthodox Good Friday 2022 will be observed on the 22nd of April, this year. Good Friday 2022 Date, Meaning, Rituals, Significance: All You Need To Know About the Day That Marks the Crucifixion of Jesus Christ.

Although the Orthodox community is situated mostly in Russia, Orthodox Christians living all over the world observe the day. The history of the day goes back to the time when Jesus Christ was forced to carry his cross to the Hill of Calvary, where he was hung on the cross between two thieves. On the day of Holy Friday, many Orthodox Christians are forbidden to take the Eucharist or communion. Some churches begin observing Orthodox Friday on the night of Thursday where the liturgy’s significant feature is the reading of the twelve sections from the gospels, all of which are accounts of Jesus Christ’s passion. In some areas of Greece, the observance is also accompanied by the burning of effigies of Judas Iscariot, who deceived Jesus for thirty silver coins.

Some priests remove icons of Jesus from crosses and wrap them in linen to reenact ancient burial rites and change all the colourful hangings in the church to black. Bulgarian churches allow Church goers to pass under a table in the middle of the church to light a candle after the customary ringing of the Church bell. The activity holds the belief that says it is a symbol of the washing away of one’s sins. In Greece, many flags at homes and government institutions and buildings are set at half-mast to mark the mournful day.

(The above story first appeared on LatestLY on Apr 22, 2022 07:45 AM IST. For more news and updates on politics, world, sports, entertainment and lifestyle, log on to our website latestly.com).