World Lemur Day 2020: Did You Know a Species of These Mammals Could Sing? Know 9 Interesting Facts About the Animal Found Only in Madagascar

World Lemur Day is celebrated on the last Friday of Oct every year. World Lemur Day 2020 falls on Oct 30. The day is observed to create awareness about lemurs which are mammals of the order Primates. On World Lemur Day 2020, we bring to you some interesting facts about these animals. Lemurs have a unique look and have varied behaviour. 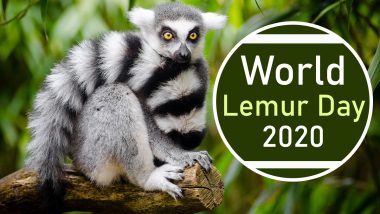 World Lemur Day is celebrated on the last Friday of October every year. World Lemur Day 2020 falls on October 30. The day is observed to create awareness about lemurs which are mammals of the order Primates. They are small in size and have large eyes, long tail and a pointed snout. They primarily live in trees, and are active at night. Lemurs are native only to the island of Madagascar. On World Lemur Day 2020, we bring to you some interesting facts about these animals. Lemurs have a unique look and have varied behaviour. This Little ‘Mouse Lemur’ Will Make Any Kid Do His Homework Right! Watch One of the Cutest Animal Video Here.

Around 98% of lemur species are threatened with extinction of which 31% are critically endangered. To create awareness about lemurs and its role in the environment, World Lemur Festival was held in 2014. Lemurs are Madagascar's unique natural heritage. It was first held by Jonah Ratsimbazafy of GERP Madagascar, one of Madagascar’s leading primatologists. The festival raised awareness about the value of lemurs as Madagascar’s unique natural heritage among scientists and the general public. It tries to bring pride in the minds of Malagasy people and thus improve the economy through tourism. The observance thus promotes lemur conservation and education worldwide. US Man Pleads Guilty to Stealing Oldest-Living, Ring-Tailed Lemur From Zoo to Keep It as Pet.

1. Lemurs are only found in Madagascar, located 250 miles off the east coast of Africa, the 4th largest island in the world.

2. There are an estimated 112 species of lemurs and they come in all shapes and sizes. The smallest, Madame Berthe's mouse lemur, has an average body weight of 30g, and the largest, weighs about 6 to 9.5 kg.

3. Lemurs have a female-dominant society with a female leader who directs a social group. Female lemurs snatch food away from the males, kick them out of sleeping spots, and even show actual physical aggression.

4. Lemurs play an important role in maintaining forest diversity, structure and dynamics through the movement of seeds. Some of them even play the role of seed dispersers.

5. Lemurs are the only primates that have blue eyes other than humans.

6. Lemurs can treat themselves on their own. Red-fronted brown lemurs eat millipedes to get rid of gastrointestinal parasites, such as worms.

7. Indri, a species of lemurs, sing and often in sync with each other to mark its territory and let others know.

8. Conservationists believe that ecotourism is the best way to ensure the survival of the lemurs of Madagascar.

9. Lemurs are said to rafted to Madagascar on floating islands of vegetation more than 40 million years ago, and they lived in isolation without worrying about predators.

The Latin word lemures means the wandering spirits of the dead in Roman mythology and has references in their cultural practices. It is important to save these animals from habitat loss and other issues or we will another animal species soon.

(The above story first appeared on LatestLY on Oct 30, 2020 09:20 AM IST. For more news and updates on politics, world, sports, entertainment and lifestyle, log on to our website latestly.com).