After the 'Strawberry festival', Uttar Pradesh will be holding more such festivals that focus on unconventional crops of fruits and vegetables. Soon the sweet potato festival will be held in Gorakhpur as part of this series. 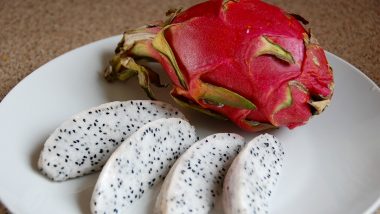 Lucknow, February 11: After the 'Strawberry festival', Uttar Pradesh will be holding more such festivals that focus on unconventional crops of fruits and vegetables. Soon the sweet potato festival will be held in Gorakhpur as part of this series. Uttar Pradesh Chief Minister Yogi Adityanath, according to the government spokesman, has also directed officials to hold a Dragon fruit festival and focus on its health benefits and medicinal value.

Dragon fruit is considered a super fruit which is extremely rich in fibre, calcium, magnesium, iron and vitamin A and C while it is devoid of fat. It is also an antioxidant. Dragon fruit is highly effective in controlling sugar.

Strawberry Festival was held last month in Jhansi. The state government now plans to hold a dragon fruit festival next. Further initiatives include Guava festival in Prayagraj, a banana festival in Kushinagar and aonla (gooseberry) festival in Pratapgarh. All these fruits figure in the 'One District One Product' (ODOP) scheme of the government.

Prime Minister Narendra Modi had also spoken about the health benefits of strawberry, dragon fruit and sweet potato in his 'Mann ki Baat' programme recently. He had mentioned the name of Gaya Prasad Singh from Lambhua in Sultanpur district in this connection. Singh has inspired some progressive farmers from Barabanki and Kushinagar to cultivate dragon fruit.

According to Singh, there is plenty of scope for growing dragon fruit organically across the state which can increase farmers' income up to eight times compared to what they are getting today.

Besides, the land on which dragon fruit is grown must have an outlet for water. There are red, pink and yellow varieties of dragon fruit. Saplings are planted to grow dragon fruit. A gap of 4 metres each is maintained between plants and the rows. For greater productivity, 10 kgs of natural fertilizer such as cow dung, laced with 50 grams of nitrogen, potash and phosphorus, is used.

Dragon fruit can be planted in the months of June and July and if proper irrigation facility is available, it can also be grown in February-March. A dragon fruit plant starts producing fruits after two years of plantation and can produce for 20 to 25 years. The plant is not watered during the budding phase. If proper pruning is done on the plant after four-five years, it can produce 100 to 150 quintals of fruit per hectare.

Furthermore, a farmer can also grow vegetables like cauliflower, eggplant and tomatoes during the gap period of four years after plantation of dragon fruit. The Yogi Adityanath government, according to sources, will be holding festivals of fruits to encourage farming and consumption of fruits that will enhance the immunity and overall health of the population and, at the same time, guarantee fair price to the farmers growing them. Through these festivals, the Chief Minister also seeks to encourage farmers to do organic farming.

(The above story first appeared on LatestLY on Feb 11, 2021 11:43 AM IST. For more news and updates on politics, world, sports, entertainment and lifestyle, log on to our website latestly.com).