Since her departure from the popular show, people have taken to the internet to find out more about the eliminated superstar. To assuage your curiosity, In this article, we have listed five facts about the Indian-origin chef Depinder Chhibber. 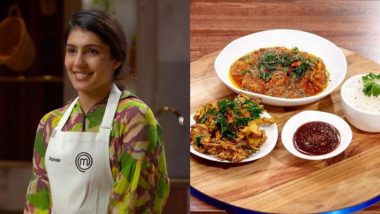 A star was born in the thirteenth season of MasterChef, who cooked up a storm with her delectable fusion dishes and kept the Judges coming back for more. The Indian-origin chef Depinder Chhibber was beloved for her signature Indian dishes that ranged from delicious albeit odd ‘Green curry cake with white chocolate chilli ganache, coconut ice cream and a coconut crumb’, to the Unique south Indian fusion recipe "Chicken 65! served on a bed of instant noodles." The Judges and contestants were quite thrilled and impressed with her culinary skills. However, the home cook Depinder Chhibber was sent home from the Simpsons Gap in the Northern Territory on the show’s June 29th episode. Since her departure from the popular show, people have taken to the internet to find out more about the eliminated superstar. To assuage your curiosity, In this article, we have listed five facts about the Indian-origin chef Depinder Chhibber.

The 29-year-old Indian-origin contestant has a multi-cultural background since she was born in born in New Delhi and moved to Newcastle at the age of 11. She now lives in Sydney with her husband Gurkirat. 5 Dishes by Depinder Chhibber, the Indian-Origin Chef Who Is Taking MasterChef Australia by Storm.

According to an interview on Indian Express, Deepinder has been a fan of the show since she was a kid and has been vying to cook there since the genesis of the show. "I have been wanting to go onto MasterChef ever since I was a kid and started watching it. I actually filled out my application form a few times and finally mustered up the courage to send it off last year. Looking at the situation caused by Covid around the world, it was now or never for me," She told Indian Express.

The unique flavours of ‘Green curry cake with white chocolate chilli ganache, coconut ice cream and a coconut crumb’, did not just impress the hell out of judges but also quickly started a trend on Social media. In an Instagram post, Chibber stated, “For those who are wondering what this tastes like, honestly it’s WILD. I never thought something like a Thai curry which is so savoury could ever taste like a dessert, and even @andyallencooks liked it so hey! Can’t wait for you all to try this at home.”

While her passion is to cook up a storm before she ventured into the Masterchef kitchen she worked as a pharmacist just like her dad. She was also pursuing her Masters in Pharmacy.

While Depinder Chhibber is inspired by the likes of Gordon Ramsay, Kirsten Tibballs, Kunal Kapur and Donna Hay, she considers grandmothers the two most influential people of her culinary journey.

While scores of people were quite bereft at her untimely departure from Masterchef, she has great things in store ahead of her culinary career. According to an Interview in the Latch, she is currently working for Chef Andy Allen at Three Blue Ducks.

(The above story first appeared on LatestLY on Jul 08, 2021 08:56 PM IST. For more news and updates on politics, world, sports, entertainment and lifestyle, log on to our website latestly.com).