National Mimosa Day is observed annually on May 16 since 2013. The objective of this event is to enjoy the classy cocktail. A mimosa cocktail is composed of champagne or other sparkling wine and chilled citrus juice. It is traditionally served in a tall champagne flute at brunch, at weddings. 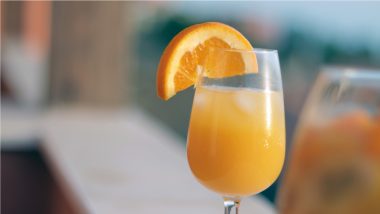 National Mimosa Day is observed annually on May 16 since 2013. The objective of this event is to enjoy the classy cocktail. A mimosa cocktail is composed of champagne or other sparkling wine and chilled citrus juice. It is traditionally served in a tall champagne flute at brunch, at weddings, or as part of a business or first class service on some passenger railways and airlines. This cocktail is named mimosa due to the yellow-flowered colour of this drink which resembles the popular flower in French gardens. This drink is made with equal parts orange juice and champagne. On the occasion of National Mimosa Day 2021, we will share with you some interesting facts about America's favourite cocktail. World Cocktail Day 2021 Date And History: Know About the Day That Celebrates the Sweet and Bitter Alcoholic Beverage.

Mimosas were invented at the Ritz Hotel in Paris in 1925, by the head bartender, Frank Meier. They are a less alcoholic version of a Buck's Fizz, which was invented four years prior by Pat McGarry at Buck's Club in London. The Buck's Fizz is two parts champagne and one part orange juice. The original recipe for mimosa called for a teaspoon of Grand Marnier, an orange-flavoured cognac liqueur developed in the late 1800s. It has a distinct bitter-orange character, and when used in mimosas today, the cocktail becomes known as “The Grand Mimosa”. Now let us take some facts about mimosa drinks. World Whisky Day 2021: All You Need To Know About The Spirit Loved Around The World.

1. Mimosa might be a popular drink in the U.S., but it originates from France.

2. The original mimosa, for example, was made with a 50/50 mix of champagne and orange juice.

3.This orange and champagne mixed drink is named after the Mimosa flower which is to southern Mexico and Central and South America.

4. Every weekend from 8 am to 2 pm, State Fare offers $15 bottomless mimosas to their brunch guests.

5. Bottomless mimosas should be approached with caution. People often don’t realize that they are feeling drunk due to the champagne being mixed with orange juice, but it eventually hits them and hits them hard.

6. There is not a fixed recipe for a mimosa, you can find a tweak in the content of this cocktail at every place.

7. The average eight-ounce mimosa (made by a blend of three parts sparkling wine to one-part orange juice) contains between 150 and 200 calories.

On National Mimosa Day 2021, enjoy this alcoholic cocktail with your friends and loved ones. Try buying a bottle of champagne and prepare this drink by putting in your own creativity.

(The above story first appeared on LatestLY on May 15, 2021 01:11 PM IST. For more news and updates on politics, world, sports, entertainment and lifestyle, log on to our website latestly.com).