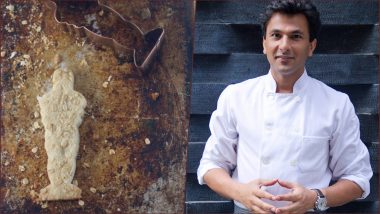 Vikas Khanna is getting ready for Oscars 2019, are you? (Photo Credits: Twitter)

There’s hardly any time left for the 91st Academy Awards to kick off. And if you’re someone living in India, the Oscars 2019 live telecast will begin from 6.30am IST on the Monday morning of February 25. The red carpet will start around 5.30am. Yes, you got to wake up early and also keep your food supplies ready to enjoy watching all the live action. And unlike the A-listed stars, presenters and performers at Academy Awards, there is no Wolfgang Puck in your life to present you with the tastiest food menu. However, we have got inspiration in the form of Vikas Khanna! Oscars 2019 Food Menu: Nashville Hot Fried Quail to Chocolate Oscar Statuettes, Here’s What Wolfgang Puck Will Be Serving at 91st Academy Awards Governors Ball.

Just like all of us, Indian celebrity chef Vikas Khanna is also pretty excited about the Oscars night. The Michelin star-chef took to Twitter to share his preparations ahead of the main ceremony. Vikas shared pictures of oats cookies in the shape of an Oscar Statuette! How awesome is that? The former MasterChef India judge writes, “Getting ready for Oscar party. #Oscars2019 @TheAcademy #OatsCookies.”

Now, we all know how ridiculously famous are the chocolate Oscar statuettes covered in 24 karat gold in Wolfgang Puck’s food menu at the Governors Ball, the official Oscars after-party. The American-Austrian chef who has been hosting these post-celebrations event for 25 years has often talked about this sweet delicacy. Because winner or no winner, everyone gets to have these chocolate Oscar statues. And now thanks to Vikas Khanna, one can also have an Oscar statuette made up of oatmeal.

The 91st Academy Awards will be held on Sunday, February 24, 2019, at 5:30 p.m. ET/3:30 p.m. PT (February 25, Monday at 6.30amIST), at the Dolby Theatre at Hollywood & Highland Center in Hollywood. The Oscars also will be televised live in more than 225 countries and territories worldwide. Meanwhile, the Governors Ball will take place in the Ray Dolby Ballroom on the top level of the Hollywood & Highland Center after the main ceremony.

(The above story first appeared on LatestLY on Feb 24, 2019 11:32 PM IST. For more news and updates on politics, world, sports, entertainment and lifestyle, log on to our website latestly.com).