International Beer Day 2019: Science-Backed Health Benefits of Beer That Will Surprise You!

On International Beer Day, let's celebrate this drink by listing down the eight health benefits of low to moderate consumption of beer. But before you guzzle a bucketful, remember that the benefits of beer can only be reaped if have it in moderation. 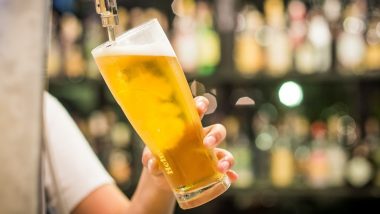 You’d be crazy to hate beer! Larger, stout or ale – whatever your style, nothing says “Party on!” like a mug of beer. And as if you need any more reasons to love beer, dare we say that it has health benefits too? But isn’t beer an alcoholic drink that expands your midsection and gives you’re the infamous beer goggles? Well yes, we won’t lie to you about that just because it’s International Beer Day 2019. But having beer in moderation can be good for your health. Health benefits of beer can range from reducing heart diseases to helping you sleep better. Here are eight healthy, science-backed reasons to have beer.

That’s right! Don’t believe anyone who tells you otherwise. Research says that the heart-loving qualities of beer may be as good as wine, at comparable alcohol amounts. Scientific evidence says having 15-30 g of alcohol per day can reduce cardiovascular risk by 25 percent. The alcohol content in your beer can be good for your heart and blood vessels. Studies also say that it may be better than spirits such as vodka, gin and whiskey when it comes to heart health.

Neurodegenerative diseases include Parkinson’s disease, Alzheimer’s disease and Huntington’s disease where the neurons in the human brain get damaged. What can beer do to help? Although the specific data on beer isn’t conclusive, observational studies say that low to moderate consumption of alcohol can reduce your risk of developing these diseases.

Beer also has cholesterol-busting properties. Studies say that beer can lower bad cholesterol in the body by increasing the amount of good cholesterol, which scoops up plaque from the arteries. But as always, the key is moderation.

While the beer belly allegations are not without their reasons, beer may be more than just empty calories. The drink may have more nutrients than what you give it credit for. Since its made of ingredients such as wheat, maize, barley and rice, it can contain traces of iron, potassium, magnesium, B vitamins and proteins. And like wine, beer is also replete in antioxidants.

Beer may also be good for your bones because it contains high levels of silicon, a nutrient you need for bone growth. Drinking the right amount of beer will help you reduce the risk of breakage and fracture. But conversely, drinking too much may make your bones brittle.

Your good friend beer may also reduce your chances of developing type 2 diabetes. Harvard scientists opine that middle-aged men who drink 1-2 glasses of beer per day may have a reduced risk of developing diabetes. Additionally, the alcohol content in beer may also increase your insulin sensitivity, preventing metabolic disease.

Who doesn’t love a good night’s sleep? Instead of turning to your regular nightcap, try a glass of beer instead. Stouts and lagers can increase the production of dopamine in the brain, promoting sound, relaxed sleep. But that’s not even the best part. Scientists believe that merely tasting beer can make you feel calmer and more relaxed.

Kidney stones can be an annoying and painful condition. And guess who comes to your rescue. You guessed it! Beer! Since beer is mostly water and alcohol (duh), both help in increasing urine output, which is great for dissolving calcium. This means a lesser risk of developing kidney stones.

That concludes our list. Our beloved beer does more than just put us in a good mood and make everyone seem more attractive. These health benefits are mainly attributed to alcohol and nutrient contents. But before you guzzle a bucketful, remember that the benefits of beer can only be reaped if have it in moderation. So enjoy International Beer Day 2019 by sharing a six-pack with your friends!

(The above story first appeared on LatestLY on Aug 02, 2019 02:06 PM IST. For more news and updates on politics, world, sports, entertainment and lifestyle, log on to our website latestly.com).