Pink, Green or Blue: How Each Holi Colour Can Damage More Than Just Your Skin

The damage done by these Holi colours is more than skin deep. Go natural and ditch chemical colours. 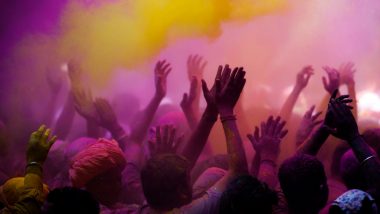 What’s Holi without all the colours, right? And we know you’ve had it with all the scaremongering articles every year around the time of Holi, warning people how the colours are damaging your skin. You don’t need that kind of buzzkill every year around the festive season. But apologies in advance; this year, we come bearing more bad news. Turns out, Holi colours are not made of sugar, spice and everything nice (Surprise!). It can end up damaging more than just your skin and can also cause harm to your internal organs.

Back in the day, Holi colours were prepared from natural ingredients like neem, vermillion, turmeric, etc. but not anymore. Commercially produced Holi colours contain a deadly cocktail of chemicals, each of which can have far-reaching effects on your health. Here’s a breakdown of how each colour can harm you.

Black is not a festive favourite like the pinks and the yellows. And after reading what it does to you, we’re sure it will fall out of favour once and for all. Black colour contains a deadly compound called lead oxide, which can affect the kidneys. A 2008 study concluded that even a short contact of the skin with lead oxide can cause the chemical to penetrate into the skin, even if it is followed by quick washing.

Green Holi colour contains a compound called copper sulphate, which is notorious for causing eye irritation, allergies, puffiness and vision problems. Since there powders and colours are applied haphazardly, the chances of them getting into the eyes are higher. And if by any chance it gets into your digestive system, it can lead to vomiting, and in extreme cases, renal failure. Green powders also contain a dye called malachite green, which a 2007 study found out was responsible for eye irritation.

Everybody’s favourite pink gulal contains a troublemaker by the name of rhodamine B, a known toxic chemical. Studies show that exposure to dust containing the pigment caused nasal itching, chest pain, burning of the throat, headache, nausea and breathing difficulties. It can reach inside your lungs and also cause respiratory irritation.

Everyone dreads metallic colours on Holi because it is notoriously difficult to wash off. Some silver Holi colours contain aluminium bromide, a carcinogen. Apart from harming the skin, the chemical can also cause damage to the eyes. If it gets into your respiratory system, it can also harm your throat and lungs.

Red is one of the most popularly used Holi colours. But nobody knows it contains mercuric oxide, a toxic substance that can be absorbed into the body through inhalation of its mist. It also has corrosive effects on the eyes and your lungs. If you have a history of allergies, chronic respiratory problems, kidney disorders or nervous system disorders, you better stay away from reds.

Blue colours contain a pigment known as ferric ferrocyanide or Prussian Blue. It poses a moderate risk for people who suffer from skin conditions. One of the known side effects of exposure to the pigment is contact dermatitis, where the skin starts itching, blistering and flaking.

It’s true that you don’t play Holi every day. So how much damage can it actually do? But why risk your health even if it is for a single day. Almost all Holi colours have the potential to damage your health in various capacities. A 2016 study conducted by Indian researchers concluded that Holi colours can damage living cells and have an inflammatory effect on your body. Imagine how much worse it would for your children. If you really want to celebrate Holi the right way, ditch these chemicals and try some of these natural Holi colours that are safe and healthy for your skin.

(The above story first appeared on LatestLY on Mar 01, 2018 12:44 PM IST. For more news and updates on politics, world, sports, entertainment and lifestyle, log on to our website latestly.com).