Spanish Flu: As Coronavirus Spreads, Here's All About The 1918 Influenza, Which Was The Deadliest Pandemic of 20th Century

The spanish flu pandemic affected more than 500 million people across the world. It was in the summer of 1918, that the deadly virus spread among military units who lived in army quarters. And, as the war ended, surviving solders returned home – bringing influenza with them. 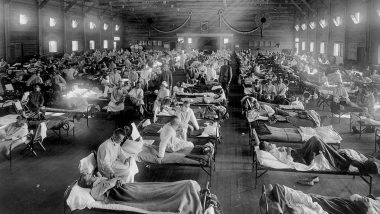 In the past 100 years, the world has seen a different types of epidemics, plagues, and pandemics. Over 100 years ago, i.e. in 1918, when the global devastation- World War I came to an end, people around the world braced for a deadly pandemic flu called the Spanish flu. The pandemic affected more than 500 million people across the world. It was in the summer of 1918, that the deadly virus spread among military units who lived in army quarters. And, as the war ended, surviving solders returned home – bringing influenza with them. The death toll is estimated to have been between 17 million to 50 million, or possibly as high as 100 million, making it one of the deadliest epidemics in human history.

This year in 2020, nearly 100 years after, the world is facing another pandemic called- Coronavirus or COVID-19. On March 12, the World Health Organization (WHO) declared coronavirus disease a pandemic. The WHO said that the COVID-19 outbreak can be characterized as a "pandemic" as the virus spreads increasingly worldwide. UN Secretary-General Antonio Guterres called for action on COVID-19 and urged all governments to immediately step up and scale up their efforts, and all people to play their part. Coronavirus Live Map: How to Track The Spread of COVID-19 Across The Globe.

Over 110 countries and regions have reported 118,326 confirmed cases, including 37,371 cases outside China. The WHO informed that the death toll due to the novel coronavirus outside the China, the epicentre of the outbreak, has increased to 1,130.

Spanish Flu, also known as the 1918 influenza pandemic affected people across the world for nearly two years from January 1918 – December 1920. It was an unusually deadly influenza pandemic, the first of the two pandemics involving H1N1 influenza virus, with the second being the swine flu in 2009. There was nothing particular ‘Spanish’ about the flu and it didn’t begin in Spain though it was badly affected like the other nations. According to reports, the flu was named such because Spain was neutral in the First World War (1914-18), which meant it was free to report on the severity of the pandemic.

As per history, the  first wave spread in US military camps in 1917. The flu caused loss of lives three times the number that fell in the Great War, and did this so much faster than any other illness in recorded history. The pandemic affected nearly half a million of those in the United States and spread to every part of the world, affecting populations in Japan, Argentina, Germany and dozens of other countries.

The Coronavirus, which was reported first in China, has spread in nearly 113 nations. As many as 1,18,326 confirmed cases of COVID-19 have been reported so far from across the world with 80, 955 confirmed cases in China alone. The death toll so far due to the deadly coronavirus has reached 4292 with 3162 deaths in China alone. Is Coronavirus an Epidemic or a Pandemic? Know The Meaning and Difference Between These Terms.

The COVID-19 virus infects people of all ages. However, evidence to date suggests that two groups of people are at a higher risk of getting severe COVID-19 disease. These are older people; and those with underlying medical conditions.

Difference between Epidemic and Pandemic

An epidemic is a term that is often broadly used to describe any problem that has grown out of control. It can be defined as "an outbreak of a disease that occurs over a wide geographic area and affects an high proportion of the population. Pandemic refers to an epidemic that has spread over several countries or continents, usually affecting a large number of people.

Since the dawn of civilization, epidemics, plagues, and pandemics have been been affecting the world populous. However, with the passage of time, technology has come to rescue and mild symptoms are detected following which people are self-quarantined, thus preventing the spread. Also, earlier there was little protective equipment for health care workers, which is not the case now.

In the wake of the surge in coronavirus cases across the globe, the IFRC, UNICEF and WHO issued a new guidance to help protect children and schools from transmission of the COVID-19 virus.

(The above story first appeared on LatestLY on Mar 12, 2020 10:18 AM IST. For more news and updates on politics, world, sports, entertainment and lifestyle, log on to our website latestly.com).