Turmeric Health Benefits: Fighting Cancer, Preventing Diabetes and Other Reasons Why You Should Have This Curcumin-Rich Spice 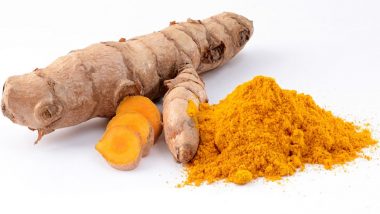 Turmeric Health Benefits: Fighting Cancer, Preventing Diabetes and Other Reasons Why You Should Have This Curcumin-Rich Spice. (Photo Credit: Wikipedia)

Turmeric is probably the most common spice you'll see in an Indian household. In the rest of the world, the health benefits of turmeric have been recognised very recently. Turmeric, also known as 'Miracle Spice' because of its benefits to our body are beyond imagination. Turmeric is a significant source of the polyphenol curcumin loaded with anti-oxidants and anti-inflammatory properties. The active ingredient curcumin present in turmeric is also a powerful antioxidant long known to have anti-carcinogenic properties.

A study that describes the miraculous properties of turmeric says, 'It (Turmeric) aids in the management of oxidative and inflammatory conditions, metabolic syndrome, arthritis, anxiety, and hyperlipidemia. It may also help in the management of exercise-induced inflammation and muscle soreness, thus enhancing recovery and performance in active people. Besides, a relatively low dose of the complex can provide health benefits for people that do not have diagnosed health conditions. Most of these benefits can be attributed to its antioxidant and anti-inflammatory effects. '

Here Are The Proven Health Benefits of The Curcumin-Rich Turmeric:

Apart from these health benefits, various studies have also evaluated its benefits for many other health conditions. A study says, 'Turmeric is used as a herbal medicine for rheumatoid arthritis, chronic anterior uveitis, conjunctivitis, skin cancer, smallpox, chicken pox, wound healing, urinary tract infections, and liver ailments.' The study further describes its health benefits by saying, It is also used for digestive disorders; to reduce flatus, jaundice, menstrual difficulties, and colic; for abdominal pain and distension; and for dyspeptic conditions including loss of appetite, postprandial feelings of fullness, and liver and gallbladder complaints. It has anti-inflammatory, choleretic, antimicrobial, and carminative actions.' There's a never-ending list of Turmeric health benefits, and healthy people must include in their diet. A little bit of turmeric powder goes a long way; you can add it to your tea or simply sip some turmeric- milk also called 'Haldi Doodh' in India.

(References: Turmeric, the Golden Spice/ Curcumin: A Review of Its’ Effects on Human Health)

(The above story first appeared on LatestLY on Aug 08, 2018 11:57 AM IST. For more news and updates on politics, world, sports, entertainment and lifestyle, log on to our website latestly.com).