World Autism Awareness Day 2019: Link Between Vaccine and Autism – Is There Any Truth to the Anti-Vaxxer Theory?

Despite study-after-study debunking the autism-vaccine link, anti-vaxxer paranoia shows no signs of abating. 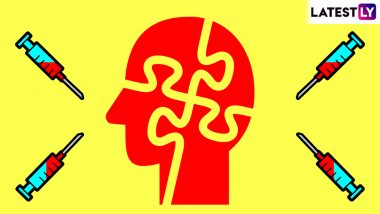 Like every year, World Autism Awareness Day 2019 will be observed on April 2 to raise public awareness about the developmental disorder. This year’s theme is “Assisted Technologies, Active Participation.” Autism is called a spectrum disorder, marked by impaired social communication and repetitive thoughts and actions. Many causes have been attributed to autism, which includes genetics and epigenetics, environmental agents and autoimmune diseases.

But in recent years, vaccines, especially those for measles and rubella, have been named as a causative factor for autism, a claim that has been vehemently debated and refuted. Thus was born one of the top 10 modern medical threats, according to the World Health Organization – Anti-vaxxer movement. But many studies failing to show a definite connection between measles vaccine and autism, the vaccine paranoia shows no signs of abating. Here’s looking into the history of the vaccine-autism link and whether there’s any truth to it. Myths about Autism Busted by an Expert.

How did Vaccine-Autism Link Start?

It all started in February 1998 when a researcher Andrew Wakefield published a paper in The Lancet, claiming the MMR (measles, mumps and rubella) vaccine has been causing a spike in autism cases. He and his colleagues stated that symptoms of autism appeared in eight children within a month after the MMR vaccine.

Wakefield observed that the MMR vaccine led to an intestinal inflammation, which transported encephalitis-causing peptides to the bloodstream. These peptides then travelled up to the brain, impairing its development and leading to autism.

But his observation was shot down for many reasons:

• The eight children did not include control subjects, which would have allowed the authors to determine whether the link was causal or coincidental.

• The assessments of the researchers were not blind (where participants don’t know the information about the test). The data collected from the patients were not systematic or complete.

• Also, the MMR vaccine has not been found to cause any intestinal inflammation.

• And finally, no one has been able to identify the peptides that travelled from the intestines to the brain.

What Do Anti-Vaxxers Say?

The primary concern of anti-vaxxers are the toxic substances present in the vaccines, namely mercury. There’s a considerable amount of paranoia against the “big pharmas” and their supposed greed.

In line with Wakefield’s hypotheses, many of these anti-vaxxers believe that the combination of measles-mumps-rubella vaccine can damage the child’s intestinal lining, which can allow inflammation-causing peptides to enter the bloodstream and then the brain. How to Behave Around Someone with Autism.

The mercury-based preservatives, according to anti-vaxxer theory, could impair the central nervous system and slow down the immune system of the child.

What Does Research Say?

Despite the fearmongering by anti-vaxxer parents group, through Facebook ads and social media echo chambers, science largely rubbishes these unfounded claims. Around a dozen studies on the topic have largely turned out negative, showing that there’s no link between vaccines and autism.

Although The Lancet initially carried the study in 1998, the journal has retracted it, indicating that they no longer believed in it.

Studies investigating the link between thimerosal, a mercury-based antimicrobial agent used in vaccines, and autism were also unable to make any connection between the two.

Even as the debates between the anti-vaccination groups and the rest of the world raged on, a massive March 2019 study conducted by Danish scientists, further reiterated that there was no link whatsoever between MMR vaccine and autism.

Why Should We Be Concerned?

Measles, the most transmissible human disease, has had a 50 percent spike in incidences all over the world. It is even returning to developed countries where immunisation programmes have been robust.

The US is going through its worst bout of a measles outbreak in years. According to the CDC, 159 cases of the diseases since January 2019. Around 900 people perished of measles in Madagascar. And in Japan, over 220 cases of measles have been reported.

Complications of measles can be life-long or fatal. And to prevent outbreaks, more than 96 percent of the community should be immunised.

The only way to tackle this problem and to curb the spread of eradicated diseases is to address the vaccine-autism hoax on individual, community and government levels. World Autism Day should be used as a podium to mobilise better awareness to root out such nefarious myths about both autism and measles.

(The above story first appeared on LatestLY on Apr 01, 2019 05:17 PM IST. For more news and updates on politics, world, sports, entertainment and lifestyle, log on to our website latestly.com).