World Autism Awareness Day 2022 Date, History & Significance: What Is Autism Spectrum Disorder? Everything You Need To Know About The Day Dedicated To ASD 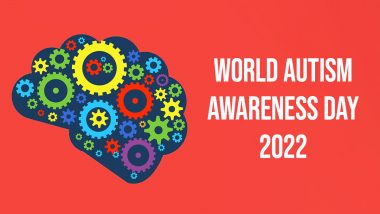 World Autism Awareness Day is observed every year on April 2 across the world. It was first observed in the year 2007 and since that time World Autism Awareness Day has been making a mark across globe every year. Its purpose is to make people aware of Autism, which is a mental condition characterized by amnesia. Major victims of Autism are children and the world needs more and more awareness about Autism every day.

The United Nations is determined to protect the world and the entire human society. Particular attention is being paid to the proper development of children. For this, World Autism Awareness Day is observed on April 2. It was announced in the year 2007.

According to experts, Autism can be overcome. For this people, majorly parents need to be aware.  Autism can happen to a person of any age. However, men are more likely to be its victim than women. In addition, children are more prone to autism. World Autism Day is United Nations's effort to spread awareness about the condition and aim at Autism being eradicated from its root.

People with such disorders experience difficulty in social communication and interactions. Even their behavior shows limited, characteristic repetition, interest and actions. The symptoms of patients suffering from these disorders start appearing in boys at the age of two to three years. But in many children, this disorders cannot ne recognized until they grow up. In these situations, the spectrum refers to the type of disorder and the severity of the symptoms. While people with mild symptoms don't need help, those with moderate or severe symptoms need a lot of support in daily life.

These symptoms include inability to perform daily tasks, trouble forming relationships and maintaining a normal life. Autism is characterized by disturbances in social interaction and abnormal behavior with limited and repetitive patterns. It is caused by a mixture of environmental and genetic factors. The biggest challenge of autism is recognizing its symptoms and making the correct diagnosis and treatment. This is the reason why there is a great need for awareness about it.

(The above story first appeared on LatestLY on Apr 02, 2022 08:13 AM IST. For more news and updates on politics, world, sports, entertainment and lifestyle, log on to our website latestly.com).