Diabetes has emerged as a major health problem in the world seen mainly in population experiencing a sedentary lifestyle. According to the Indian Diabetes Federation (IDF), about 70 million people in India are diabetic. 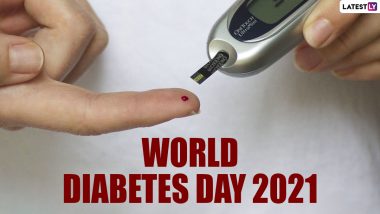 Diabetes has emerged as a major health problem in the world seen mainly in population experiencing a sedentary lifestyle. According to the Indian Diabetes Federation (IDF), about 70 million people in India are diabetic. Diabetes also paves way to many other diseases. World Diabetes Day is celebrated every year on November 14 to raise awareness about metabolic disease. Diabetes mellitus (DM), commonly referred to as diabetes, is a group of metabolic diseases characterized by high blood sugar levels over a long period of time. Symptoms of high blood sugar include frequent urination, increased thirst, and increased appetite. To prevent this disease, not only awareness but also lifestyle changes are important. Due to irregular eating habits and less physical activity, the number of diabetic patients are staggering. IDF i.e. International Diabetes Federation chooses a theme for World Diabetes Day every year. Fruits for Diabetes Patients: 10 Diabetic-Friendly Fruits Rich in Fiber and Can Slow Down the Sugar Spikes!

World Diabetes Day is celebrated every year on November 14 as the birthday of Sir Frederick Banting, who discovered insulin in 1922 along with Charles Best. World Diabetes Day was observed first in 1991 by the International Diabetes Federation and the World Health Organization in view of the growing concerns about this disease and to spread awareness about it. Since then it is celebrated every year with different themes.

World Diabetes Day is the largest diabetes awareness campaign, reaching more than 1 billion people in more than 160 countries. The campaign draws the world's attention to issues related to diabetes and places it firmly in the public and political spotlight. It also provides a global forum for issues related to diabetes. Apart from this, the work of expediting the process of concrete action against the disease is also encouraged  on World Diabetes Day.

This campaign is represented by the blue logo from 2007. It was adopted after the resolution was passed in the United Nations. It reflects the unity of global society in its response to diabetes that runs every year with a dedicated theme and awareness of diabetes is the main goal of this day and campaign.

(The above story first appeared on LatestLY on Nov 15, 2021 11:18 AM IST. For more news and updates on politics, world, sports, entertainment and lifestyle, log on to our website latestly.com).