Given that women are the largest untapped reservoir of talent in the world, this seems counterintuitive and detrimental in the larger scheme of the business sphere. A recently developed network named The Entrepre女ers Network aims to address this, providing inspiration, support and aid to female businesswomen across the globe. 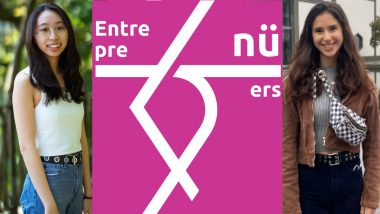 Networking is the cornerstone of what it means to be an entrepreneur. From communicating with manufacturers to entertaining clients, business demands that your networking skills are excellent. While for men, who often have easy access to networking opportunities, this is a fairly simple task, women frequently have a much harder time in this regard.

Given that women are the largest untapped reservoir of talent in the world, this seems counterintuitive and detrimental in the larger scheme of the business sphere. A recently developed network named The Entrepre女ers Network aims to address this, providing inspiration, support and aid to female businesswomen across the globe.

The Entrepre女ers Network was founded by female college students Weilyn Chong (Princeton 24’) and Ali Debow (NYU Shanghai 24’), who started the network after realising that there was little support for women interested in exploring the business avenue. After having realised this, they initially started The Entrepre女ers Podcast, interviewing a number of successful female businesswomen including CEO of 100 Women in Finance Amanda Pullinger, and Katherine Humouth, Founder & CEO of Sheertex.

Having ended the podcast’s first season and racking up thousands of listeners in the process, the pair expanded their initiative, turning it into a community of female Gen-Z entrepreneurs. In essence, the network focuses on empowering female entrepreneurs around the globe and fostering an appreciation for business in the next generation.

The prevalence of The Entrepre女ers Network in the modern age has taken on a major cultural role. While the digital age continues to expand and female entrepreneurs become more common, the network aims to connect businesswomen around the globe with one another - whether that be through their podcast or via other means such as starting a chapter at educational institutions. In short, it is a safe space for all women with interests in business to explore their passion, developing the skills necessary to succeed along the way.

Given that founders Weilyn and Ali are still college students themselves, they have a clear understanding of the type of help young entrepreneurs need and the mediums through which this support can be most easily accessed. With this understanding and their complementary skill sets, Ali and Weilyn have managed to build a community of visionary entrepreneurs.

After having established itself as one of only a few premier podcasts for women, the future looks bright for Weilyn and Ali’s initiative. Looking ahead to the future, it seems that the Entrepre女ers Network will continue to grow, branching into a variety of new avenues.