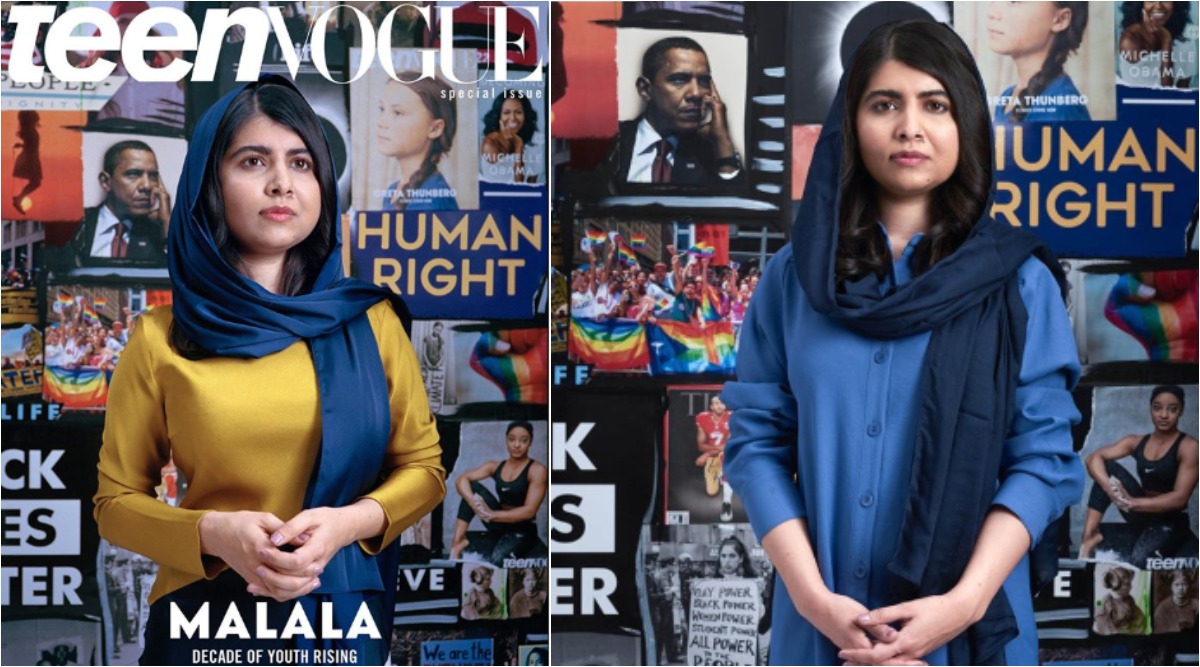 Vogue did the unthinkable once again! Although they are known for their high-end fashion content, the magazine has also at multiple times shown their stand on varying issues. While models, actors and singers feature their prestigious cover every month, this time it is a person known for social activism. Nobel laureate Malala Yousafzai who rose to fame after she survived a bullet shot by the Taliban has graced the cover of the coveted magazine. She has been featured in a story called Decade of Youth rising, a part of series which looks at youth activism since the 2010s. In the interview, Malala spoke to Teen Vogue executive editor Samhita Mukhopadhyay about her fight for girls education, issues related to Islamophobia other than climate change protests, young activist Greta Thunberg, mental health and the power of Greta Thunberg. Who Is Malala Yousafzai? 11 Interesting Facts About the Nobel Prize Winner.

In the interview, she says, "What has given me hope is that the last decade was a decade of youth activism, but the next one is going to be about youth change-making, and that’s what gives me hope. It's like we have done our activism; we have done enough to raise our voice. And I think the next step is now let’s make the change, let's be the change-makers, let’s get more involved in this." Greta Thunberg Quotes That Will Make You Take a Hard Look At Climate Change and The State of Planet Earth!

As we close out the #20teens, we recognize that the defining characteristic of the last 10 years has been the rise of youth activists; in many ways, @Malala Yousafzai was among the first to lead the charge. ⁣ ⁣ In 2012, when Malala was just 15 years old, an armed member of the Taliban tried to kill her for speaking out about girls' right to learn. She survived the assassination attempt and went on to become one of the most famous teenagers in the world, building a global movement to demand girls' right to an education. She cofounded the @MalalaFund, wrote a book, and at 17 years old, became the youngest-ever recipient of the Nobel Peace Prize. ⁣ ⁣ For Teen Vogue's final cover of the decade, we talked to the now 22-year-old Malala about education, healing from trauma, and why the 2020s will be defined by youth change-making (link in bio). ⭐⁣ ⁣ ✍🏼: @thesamhita⁣ 📸: @delphinediallo⁣ Stylist: @lpeopleswagner⁣ Hair: @seanchristopherfears⁣ Makeup: @fatimotisadare

When asked if she ever went through depression or struggled with depression, she said, "Yes, but I have always asked for help. That's the key that I would say to everybody. Even if you feel 'I don't think the issue is too big. I don’t think I'm in a depression or anxiety yet' or 'I don't think it's [bad enough to] still go out and ask for help."

The last ten years have been rooted in the brilliant, world-changing demands of teens across the world. As Teen Vogue reflected on this, we knew there was one perfect person to sit down and reflect on this wild decade with: @Malala Yousafzai. Read the full cover story at the link in bio. ✍🏼: @thesamhita⁣ 📸: @delphinediallo⁣ Stylist: @lpeopleswagner⁣ Hair: @seanchristopherfears⁣ Makeup: @fatimotisadare

"The next [decade] is going to be about youth change-making, and that's what gives me hope." Go behind-the-scenes on @Malala Yousafzai's @teenvogue cover shoot. 🎥: @ryancmitchel

She also spoke about millions of children who took to streets protesting against climate change. Talking about the initiative which was carried out across countries, she said, "For me to see millions and millions of young people, not just in the US, not just in the UK – the so-called developed countries – but from all across the world, in Pakistan, in India, in Kenya, you see these young girls, especially women that are coming forward, and you also see older people in the crowds – I think that’s when you realise how powerful the voices of these young people can be. And I think awareness is important. That’s the first step towards a change." Malala Yousafzai’s Best Speeches on Education and Empowerment That Will Inspire You.

Talking about Islamophobia she said, "Some of the readings that I've done, it shows that you see Islamophobia more in areas where the community is less diverse.... So when the communities are more diverse, you would not see as much Islamophobia, [e.g.] in New York or in London. So that is an element of it, how much that society is integrated. And people need to engage with and talk to each other.: