Greta Thunberg Quotes That Will Make You Take a Hard Look At Climate Change and The State of Planet Earth!

Environmental activist Greta Thunberg on Monday ripped apart the world leaders for their inaction towards climate change at the UN Climate Change Summit. As people widely share quotes from the speech at the UN with the hashtag #HowDareYou, we bring you some of the hard-hitting lines on climate change by the 16-year-old in the past. 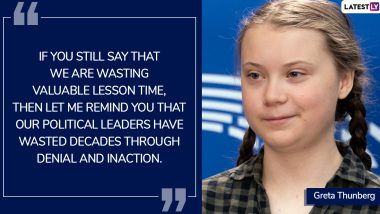 Environmental activist Greta Thunberg on Monday ripped apart the world leaders for their inaction towards climate change with her fiery speech at the UN Summit. She questioned the authorities for doing very little in saving the planet from another mass extinction. A visibly angry and emotional Greta demanded answers from the lawmakers for betraying her generation and barring their right for a good future. She asked the gathering, "You come to us young people for hope. How dare you?" The climate change activist's speech has now gone viral on the internet with and has received thunderous applause from social media users. As people widely share quotes from the speech at the UN with the hashtag #HowDareYou, we bring you some of the hard-hitting lines on climate change by the 16-year-old in the past.  Who Is Greta Thunberg and Why Has She Been Nominated for the Nobel Peace Prize?

Greta's speeches have always been thought-provoking making everyone think about where the planet is heading. She has multiple times in the past questioned law-making bodies for not doing enough for the future generation. On Monday, she yet again attacked the leaders of first-world nations in their inefficiency in tackling the global crisis of climate change. She asked, "You have stolen my dreams and my childhood with your empty words, yet I'm one of the lucky ones. People are suffering, people are dying, entire ecosystems are collapsing. We are at the beginning of mass extinction and all you can talk about is money and fairy tales of eternal economic growth - how dare you?" You can read the full text of her speech here. 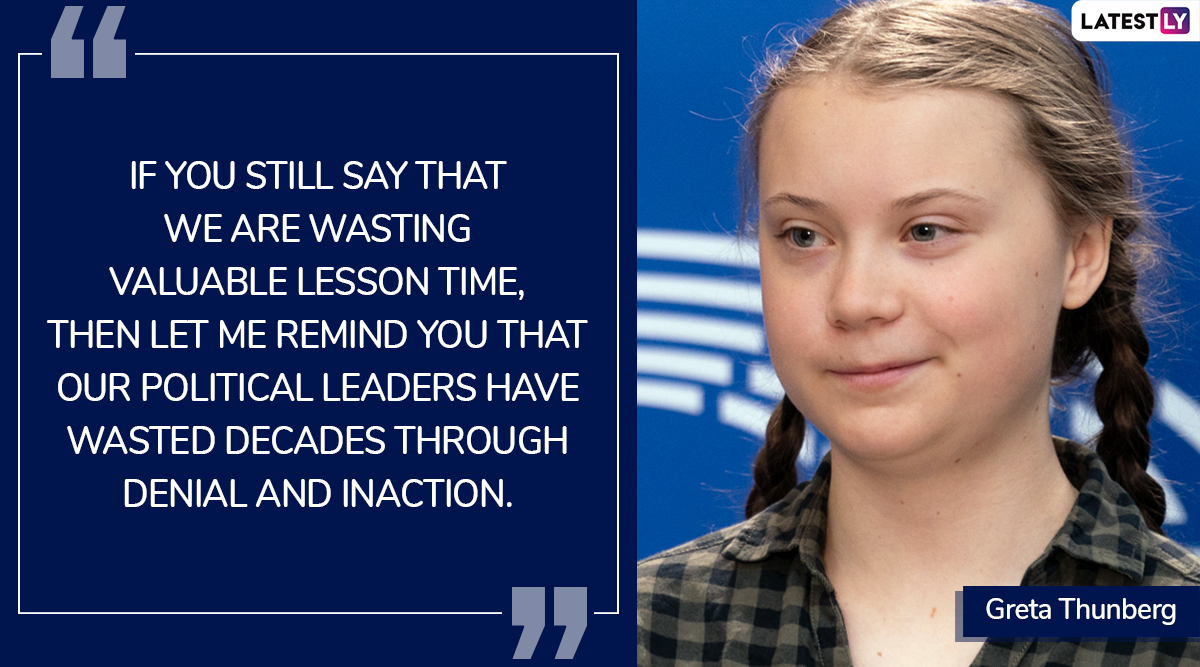 "If you still say that we are wasting valuable lesson time, then let me remind you that our political leaders have wasted decades through denial and inaction."

-Rounding on the global business elite in Davos, January 2019 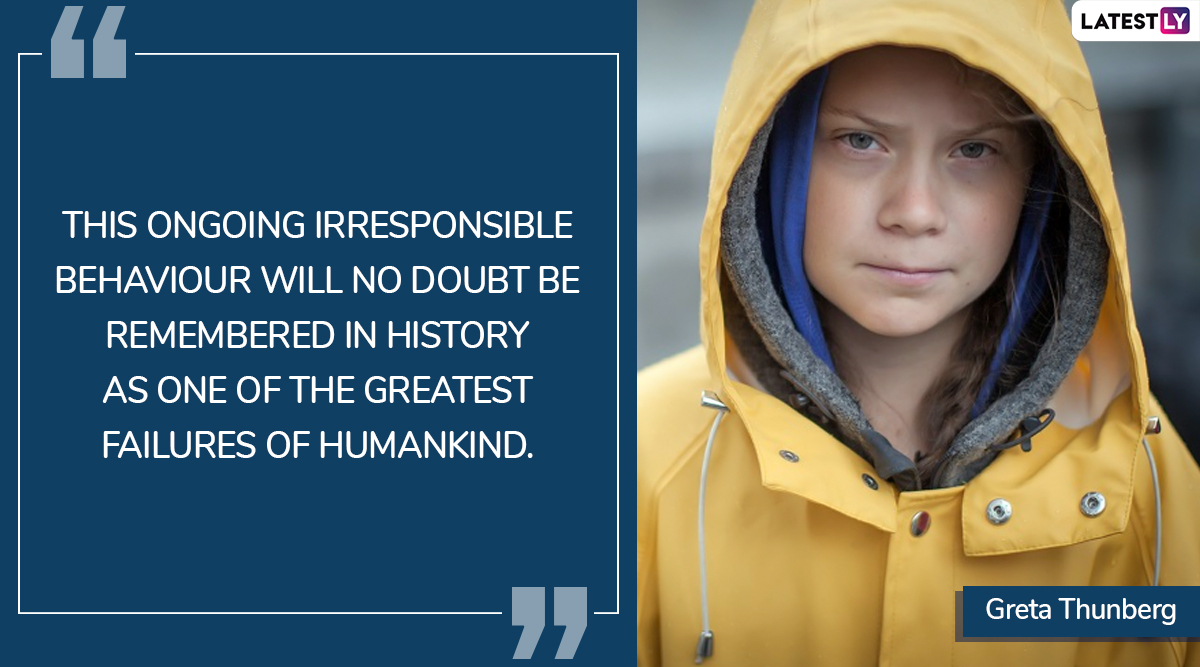 "This ongoing irresponsible behaviour will no doubt be remembered in history as one of the greatest failures of humankind."

-Addressing the MPs in the British Parliament, April 2019 "In the year 2030, I will be 26 years old. My little sister Beata will be 23. Just like many of your own children or grandchildren. That is a great age, we have been told. When you have all of your life ahead of you. But I am not so sure it will be that great for us."

-Addressing the MPs in the British Parliament, April 2019 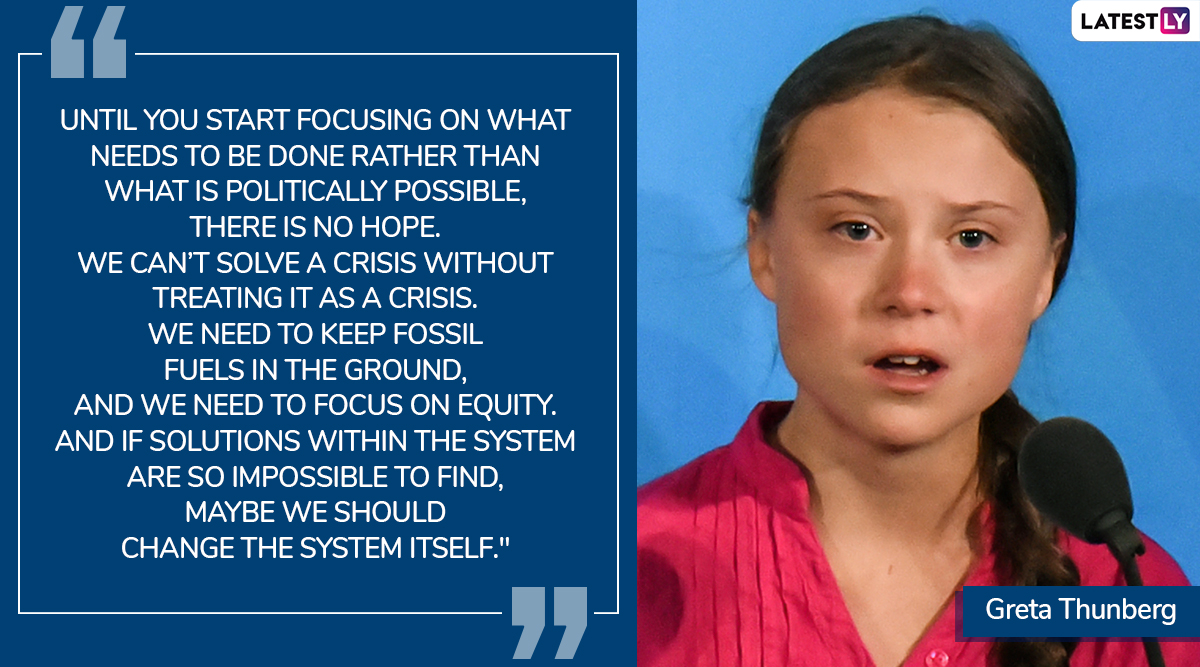 "Until you start focusing on what needs to be done rather than what is politically possible, there is no hope. We can’t solve a crisis without treating it as a crisis. We need to keep fossil fuels in the ground, and we need to focus on equity. And if solutions within the system are so impossible to find, maybe we should change the system itself." 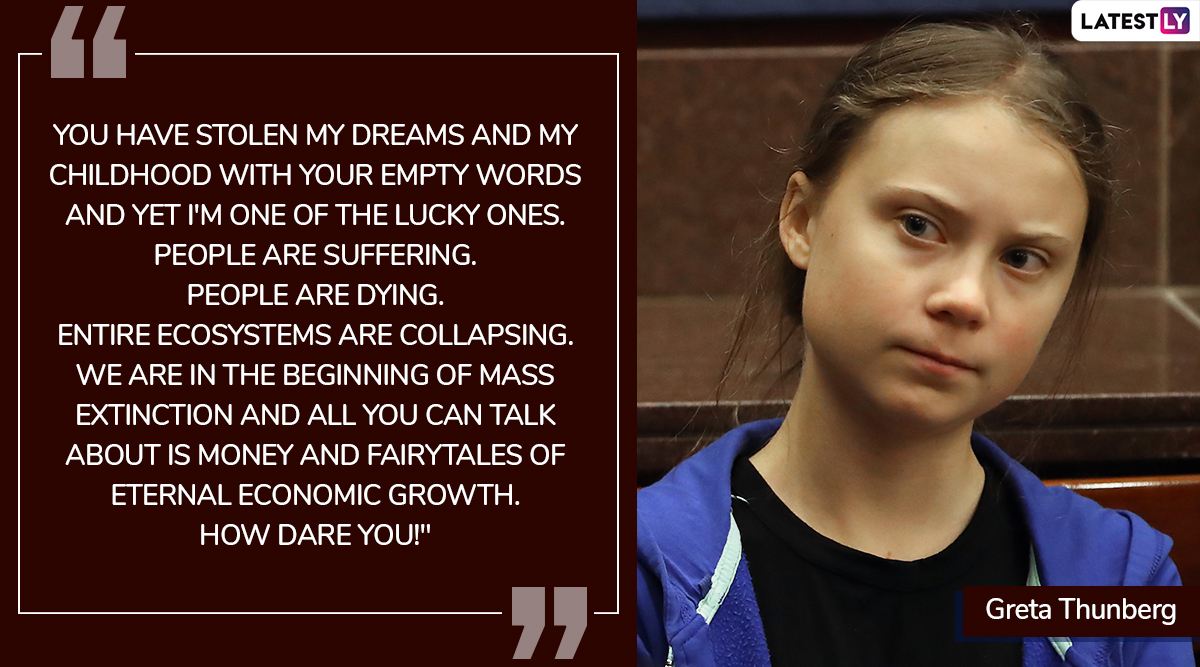 "You have stolen my dreams and my childhood with your empty words and yet I'm one of the lucky ones. People are suffering. People are dying. Entire ecosystems are collapsing. We are at the beginning of mass extinction and all you can talk about is money and fairytales of eternal economic growth. How dare you!" 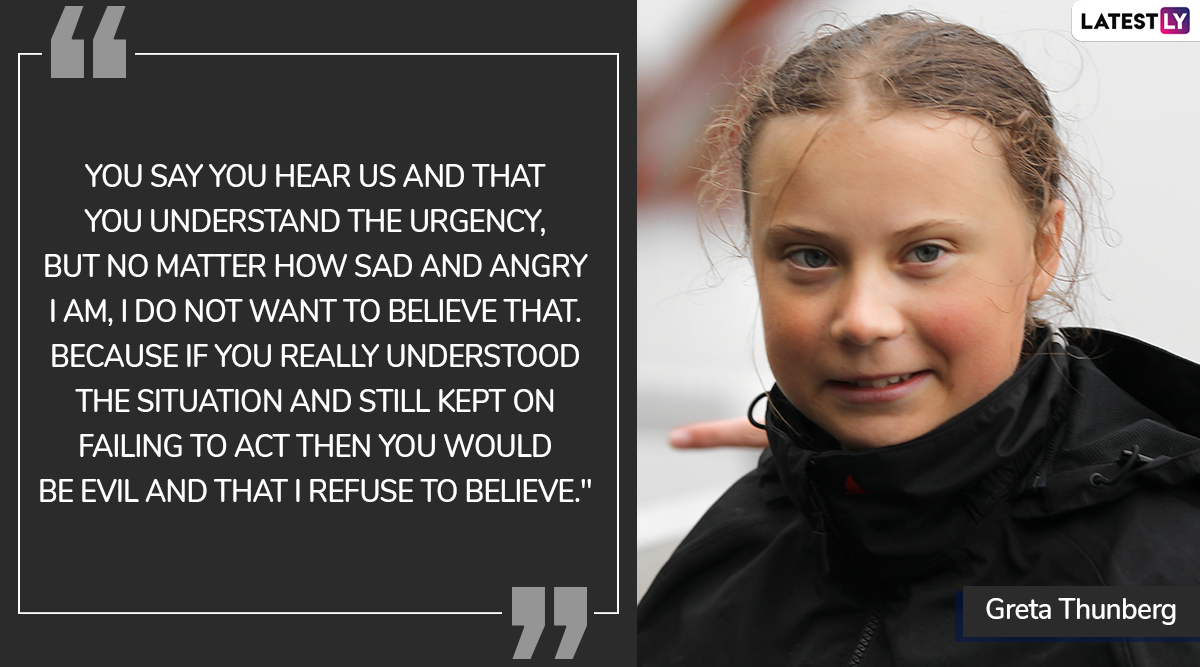 "You say you hear us and that you understand the urgency, but no matter how sad and angry I am, I do not want to believe that. Because if you really understood the situation and still kept on failing to act then you would be evil and that I refuse to believe." 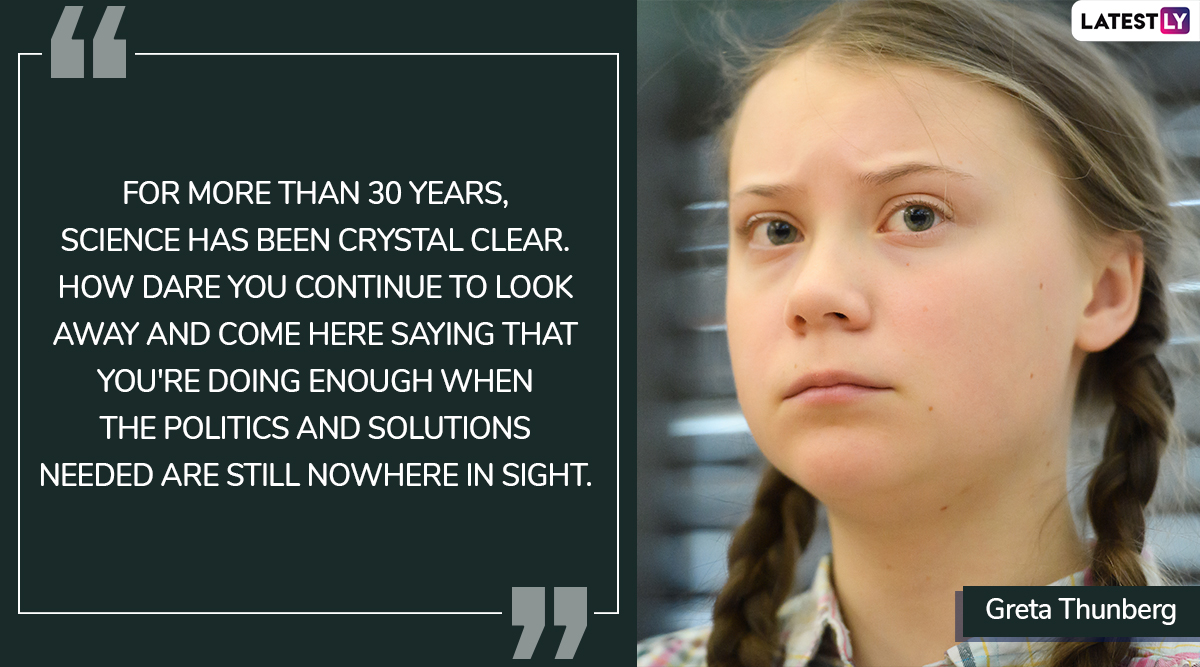 "For more than 30 years, science has been crystal clear. How dare you continue to look away and come here saying that you're doing enough when the politics and solutions needed are still nowhere in sight." 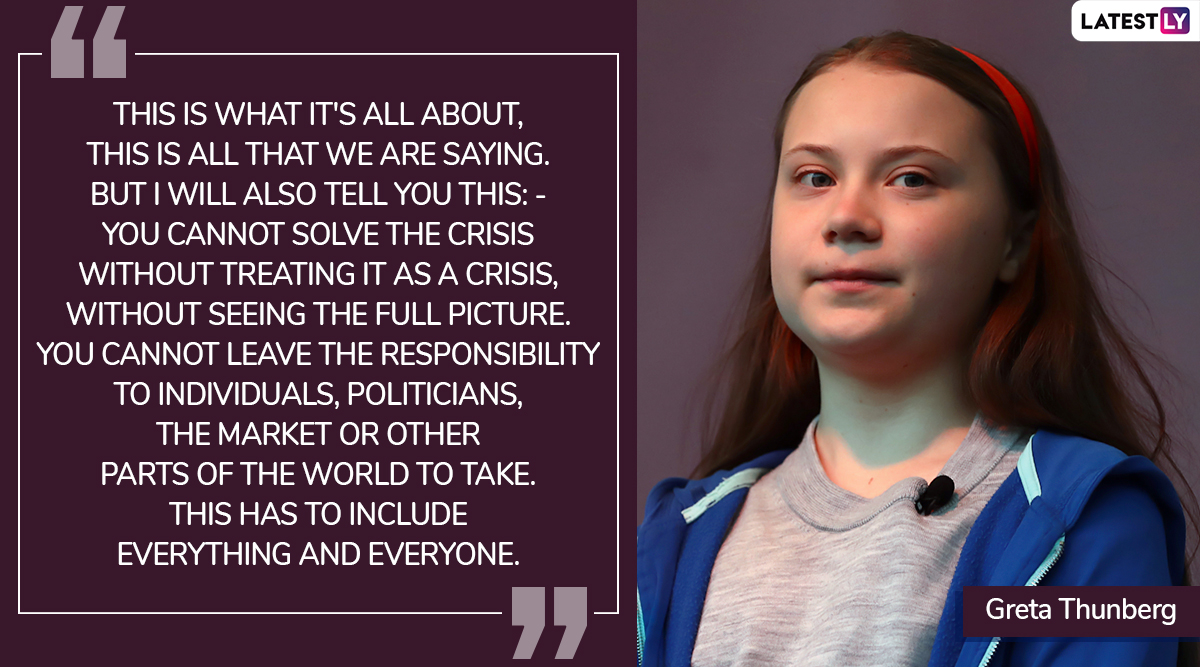 "This is what it's all about, this is all that we are saying. But I will also tell you this: -You cannot solve the crisis without treating it as a crisis, without seeing the full picture. You cannot leave the responsibility to individuals, politicians, the market or other parts of the world to take. This has to include everything and everyone." 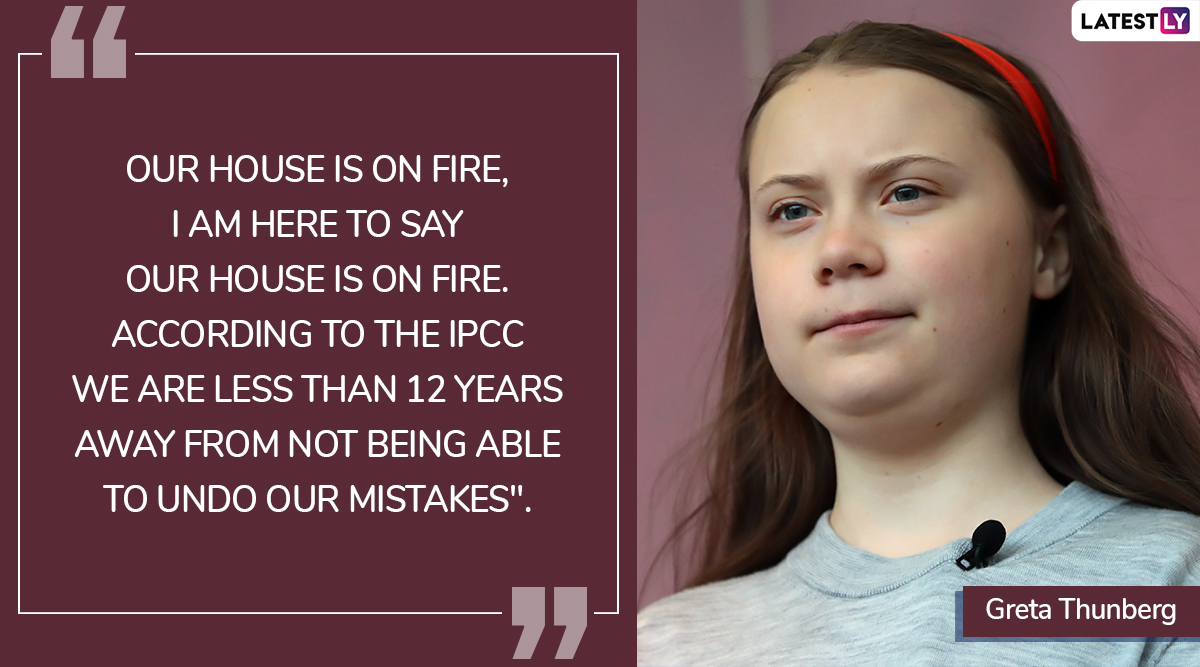 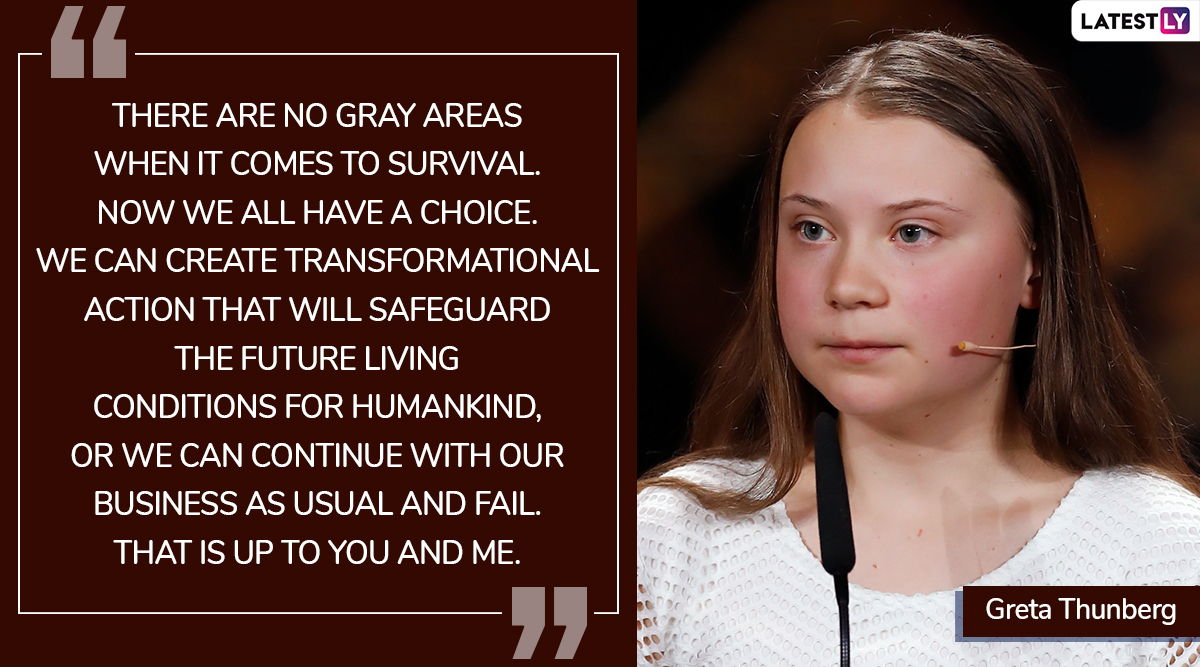 There are no gray areas when it comes to survival. Now we all have a choice. We can create transformational action that will safeguard the future living conditions for humankind, or we can continue with our business as usual and fail. That is up to you and me." 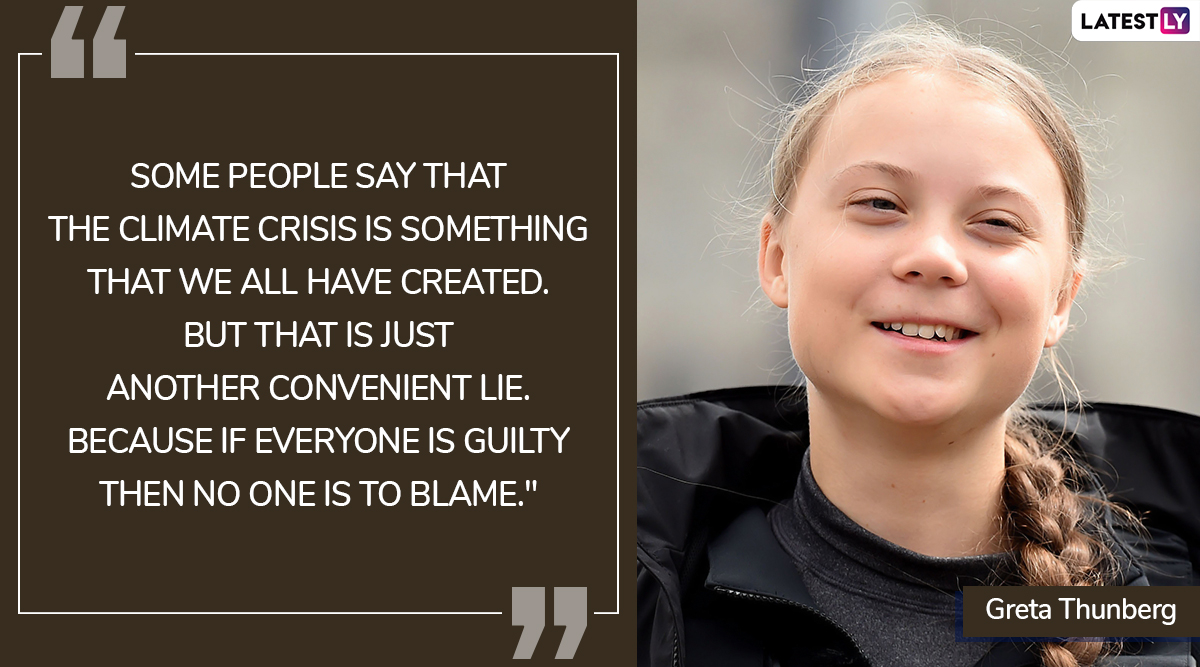 "Some people say that the climate crisis is something that we all have created. But that is just another convenient lie. Because if everyone is guilty then no one is to blame." 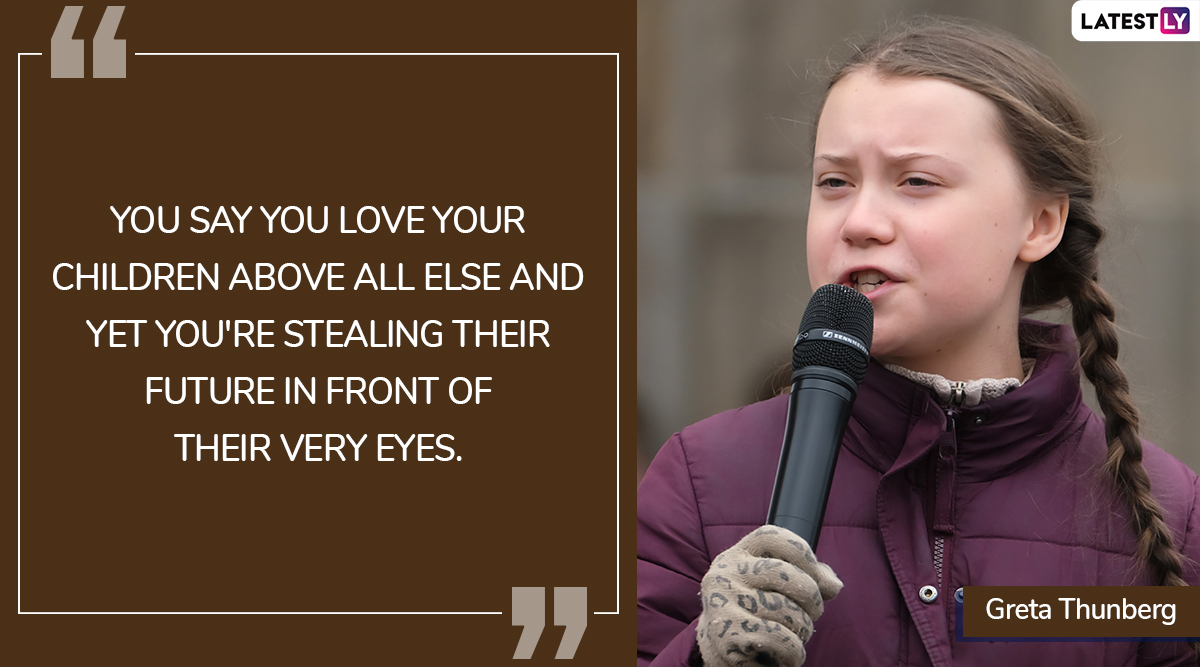 "You say you love your children above all else and yet you're stealing their future in front of their very eyes."

The summit was also attended by the United States President Donald Trump who had termed climate change as a "propaganda" and did not support the 2015 Paris Climate Agreement. Video footage of Greta giving a death stare to the POTUS on spotting him had gone viral earlier in the day. Her gesture received a positive response from social media users who said that "her look said it all". Meanwhile, Trump tweeted the video of Greta's speech at the UN wishing her a "bright and wonderful future".

(The above story first appeared on LatestLY on Sep 24, 2019 01:59 PM IST. For more news and updates on politics, world, sports, entertainment and lifestyle, log on to our website latestly.com).