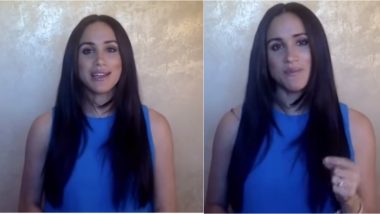 Meghan Markle, the Duchess of Sussex on Tuesday addressed girls and young women around the world on varying issues during the United Nations Foundation's 2020 Girl Up Leadership Summit online from her Los Angeles home. Meghan who quit her royal duties to live in the United States with Prince Harry spoke about gender equality and female empowerment. She looked beautiful wearing a blue dress and people were quick to notice a change in her hair. Some pointed out that she had a haircut, but others believe those were hair extensions. People said that new hair showcased her new life. Here's Why Meghan Markle's Recent Top Knot Hairdo Has Got Everyone Talking!

Meghan who usually wears a low bun, sometimes a slicked-back ponytail or keeps it as smooth waves, surprised people with her new hairstyle. Hairdresser George Northwood, who styled Meghan’s locks when she was in the UK said that the long hair was Meghan's and not extensions. She was quoted by Telegraph as saying, "She's making a statement with hair that long - it represents strength and a sense that she's really got everything sorted." She added, "This straighter, longer hairstyle marks a new chapter in her life without such strict protocols." Meghan Markle’s Doppelganger? Missouri Mom Goes Viral for Her Uncanny Resemblance to the Duchess of Sussex (View Pics)

Northwood added, "When we were preparing looks for life in the Royal Family, as you'd expect, everything is structured, you can't push the boundaries. And so, during our time together, we decided to create a more undone look to balance out the formal dress code, often including soft tendrils that ultimately became her signature messy bun. Whereas now, she can take a more relaxed approach to how she dresses, therefore this sleeker blow-dried hairstyle works beautifully - it's casual but still polished and appropriate for her new life."

Meghan Markle lives with Prince Harry and their baby son Archie in Los Angeles. They stepped down from royal duties at the end of March due to varying reasons. During the meet, she noted that young women had already undertaking positive changes by organising Black Lives Matter protests and advocating for criminal justice reform, mental health resources, and steps to end gun violence. During the address, she told her audience to drown out sometimes "painfully loud" negative online chatter with positivity.

She said, "You understand that our online world has the power to affirm and support as much as it does to harm. There will always be negative voices and sometimes those voices can appear to be outsized, and sometimes they can appear to be painfully loud. You can and will use your own voices to drown out the noise. Because that's what it is - just noise. But your voices are those of truth and hope. And your voices can and should be much louder."

(The above story first appeared on LatestLY on Jul 16, 2020 09:14 AM IST. For more news and updates on politics, world, sports, entertainment and lifestyle, log on to our website latestly.com).