Solomon is no stranger to lavish stunts and living large. The Miami rapper stole headlines during the Bryce Hall vs Austin McBroom mega influencer boxing match, when he stopped traffic outside of the stadium to promote his single “Miami”. 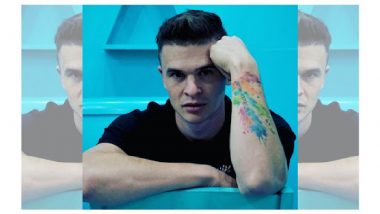 The rap game got a new contender this past year when Solomon, a rapper based out of Miami, released over 16 hit singles that immediately connected with thousands of fans around the country. Some of his biggest hits include “Trend Up”, “Virginia Is For Lovers” and “Miami”.

Recently Solomon sent his fans into a frenzy when he announced he just wrapped filming an insane $60,000 music video with YouTube rap sensation DDG. The music video is for their song “Typa Life” and it was shot in a Beverly Hills mansion by acclaimed celebrity media producer Ric Mendoza.

Solomon is no stranger to lavish stunts and living large. The Miami rapper stole headlines during the Bryce Hall vs Austin McBroom mega influencer boxing match, when he stopped traffic outside of the stadium to promote his single “Miami”. Solomon rented a massive truck, stood on top as he popped champagne and rapped the lyrics to his single with his name shining in giant LED lights.

DDG and Solomon may have sent their fans all over the country into a frenzy with their announcement and a sneak peak of the music video, set to be released in the next month. Comments of extreme hype and excitement on Solomons live stream on Instagram during the announcement last week were pouring in.

Fans overwhelmingly connect with Solomon’s positive energy, his larger than life attitude and love how catchy his music is. That’s why rap legends like Fat Joe and Busta Rhymes have endorsed Solomon. Over the past month Fat Joe and Solomon released a hit single called “Trend Up” and Busta Rhymes and Solomon released their highly anticipated single “Moon”.

Solomon's music has become a regular at high profile night clubs all over Hollywood, Miami, and Las Vegas as his reach continues to skyrocket. Anyone can reach Solomon on his official Instagram handle solomon_schewel to know more about his music and career. As the music industry continues to evolve it is clear that it will require initiative and hard work from those who wish to stay on top. One thing is for sure, however the space changes, it is certain that Solomon will be there, leading the charge.