Prince Harry Birthday: Facts And Trivia About the Duke of Sussex As He Turns 36 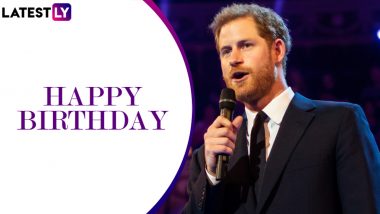 Prince Harry, Duke of Sussex born on September 15, 1984, will turn 36 years today. The member of the British royal family is sixth in the line of succession to the British throne. He is the younger son of Charles, Prince of Wales and Diana, Princess of Wales. Harry married Meghan Markle, a former actress in 2018 and they have a son, Archie Harrison Mountbatten-Windsor. On his birthday, we take a look at some interesting facts about the royal. Also, this is Harry's first birthday away from his royal family. The birthday party will be hosted by music producer David Foster at his home in Los Angeles. Meanwhile, here are some interesting facts about Prince Harry. Prince Harry and Meghan Markle 2nd Wedding Anniversary: Pictures From the Royal Wedding of Duke and Duchess of Sussex to Relive Their Fairytale Moment.

It's rumoured that Prince Harry goes by the nickname of "Spike Wells" with some friends and his Scotland Yard protection officers. It was also reported that Harry maintained a Facebook account with that name. While there are always ongoing talks and rumours about royals, it is not known which is actually true. We wish Prince Harry a Happy Birthday!

(The above story first appeared on LatestLY on Sep 15, 2020 09:10 AM IST. For more news and updates on politics, world, sports, entertainment and lifestyle, log on to our website latestly.com).