Jeffree Star can’t keep himself out of the drama. Remember when he said he will soon expose Too Faced for playing NikkieTutorials dirty? Well, he’s out with his new documentary series with Shane Dawson and doesn’t spare anyone. Haley Pham, an 18-year-old Youtuber made some poor travel choices and ended up getting roasted and hated all over Youtube. 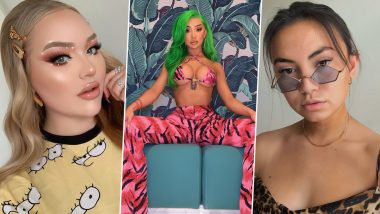 Jeffree Star can’t keep himself out of the drama. Remember when he said he will soon expose Too Faced for playing NikkieTutorials dirty? Well, he’s out with his new documentary series with Shane Dawson and doesn’t spare anyone. Haley Pham, an 18-year-old Youtuber made some poor travel choices and ended up getting roasted and hated all over Youtube. People are called her entitled as she tried to use being an “influencer” and “Youtuber” to cut line at the airport and went on to get mad about it when she couldn’t do so. And Nikita Dragun can’t stop lying!  Tea Tuesday: Jeffree Star Gets Messy Again and James Charles Shades Ex-Best Friend Emma Chamberlain.

If you want to know all the gossip from the last week without going through ever drama video or story at a time, this is the spot of you. Welcome to Tea Tuesday and let’s begin!  Tea Tuesday: James Charles in Another Plagiarism Scandal and Jaclyn Hill Force Feeds Makeup down Her Subscribers' Throats... Again.

Nikkie Tutorials vs Too Faced Cosmetics

Nikkie de Jager or Nikkietutorials on YouTube had collaborated with Too Faced for her own palette back in 2016. The palette had some seriously mixed reviews and people struggled to understand how it looked so good on screen but performed poorly in real life. The palette went on to sell out and Too Faced earned over 10 million dollars for it. However, Nikkie was only paid $50,000 for her work. Jeffree Star knew about this and has finally exposed everything Too Faced did with Nikkie. Her payment was also delayed by nine months. And in the span of those nine months, Nikkie could not work with any other brands.

Haley Pham took a trip to Greece with her boyfriend and got in trouble for her “review” on the place. She bashed the dreamy vacation destination and said people should spend their money somewhere else. She also went to Italy and tried to use her influencer status to cut line at the airport. She was annoyed at the fact people didn’t let her cut line and get her stuff from the lost and found.

Nikita Dragun is being called a liar all over the internet. She had claimed she topped in her class when she graduated and a classmate came forward to expose her lie. He said she rarely attended classes and struggled to pass. When she came to the Philip DeFranco show this week, she said she was the first to receive her degree in her classmates, not the first in class academically. Um… Not only the internet, but Philip DeFrance also laughed at this statement. Nikita also photoshopped the billboard outside her pop-up store for some reason but people have not stopped trolling her since it was noticed.

What are your thoughts on this week's tea? Are you laughing at Nikita Dragun or do you want her cancelled? Did Haley Pham annoy you with her behaviour or do you think people should cut her some slack as she's only 18? Comment below and let us know what you think and stay tuned for more tea next week!

(The above story first appeared on LatestLY on Oct 08, 2019 11:33 AM IST. For more news and updates on politics, world, sports, entertainment and lifestyle, log on to our website latestly.com).