KO’s physique is often compared to Bollywood sensation John Abraham. They both possess a physique that can never go out of fashion - ‘Mesomorph’. Yes, that means their body is neither too lean nor too beefy. 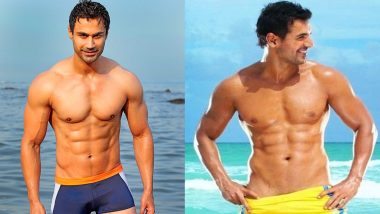 Wellness is taking on a whole new meaning in 2020. With the spread of the pandemic, everyone is looking out for newer ways to be fit sitting at home. While we are at it, we had a word with India’s top model Karan Oberoi ‘KO’ on how he remains fit and who inspires him in the industry to be at top of his game. KO’s physique is often compared to Bollywood sensation John Abraham. They both possess a physique that can never go out of fashion - ‘Mesomorph’. Yes, that means their body is neither too lean nor too beefy.

As one says, as minds think alike, they both consider their body as a temple. 32-year-old KO who holds top fitness model title and has also appeared on Men’s Health cover was quite modest when asked about how he feels being compared to John, he says ‘It’s always an honour when people say that I have a similar personality and body like John but I think I am nowhere around him. He’s an icon and I am still a learner when it comes to fitness”.

Not just physique but they possess a similar lifestyle too. KO akin to John has never been involved in any substance abuse and lives quite a disciplined lifestyle similar to him.  Being a youth icon, Oberoi has always tried his best to aspire young guys to achieve a body like a male model. In these tough times, he is trying his best to stay in shape and take out time and ways to workout at home amid lockdown.

Model Karan Oberoi advise, if anyone wishes to achieve a body like him, then being ‘consistent’ is the key. If you had been consistent in the gym for a year or even a few months, you need to find out ways to workout at home. A lot of men have a lot of interest in gymming, but they stop going after a while or find reasons for not going, this is where things can go wrong. While we are at home, he advises to fall in love with green vegetables and citrus fruits unlike on normal days where we eat junk, chocolates and other unhealthy food 2-3 times a week.

On normal days, anyone who has disciplined eating habits including high protein diet; consistent yet intense workout routine including 3 days workout in the gym and 3 days cardio such as running; stays away from sugary, salty food and all sort of addictions can help you achieve this kind of body in no time. When Karan Oberoi aka KO talks about eating right, he also emphasizes having cheat days because it’s important to live life too and in a way the body also keeps getting shocks which is great for muscles for a change.