For the unaware, Ranbir and Alia began dating on the sets of Ayan Mukherjee's Brahmastra in 2018 and made their first public appearance as a couple at Sonam Kapoor's wedding in the same year. 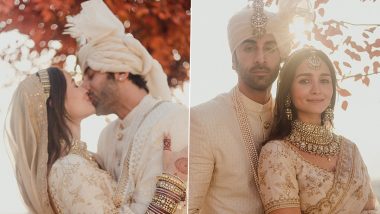 The excitement over Ranbir Kapoor and Alia Bhatt's wedding continues even as the newlywed couple are said to be all set for their honeymoon in South Africa. After the first wedding pictures shared by Alia on her Instagram, now new pictures from their 'gathbandhan' ceremony have taken the Internet by storm. Neetu Kapoor Calls Alia Bhatt Her ‘Bahurani’ as She Shares a Stunning Picture of RAlia from Their Wedding!

Gathbandhan is a ritual in Hindu weddings in which the bride's 'pallu' is tied to the groom's scarf. The ritual symbolises the union of the couple for eternity. From the groom's side, mother Neetu Kapoor, sister Riddhima Kapoor Sahni and cousin Karisma Kapoor performed the rituals, as Ranbir's other cousin, Kareena Kapoor Khan, stood by the newlywed couple's side. Kareena Kapoor Khan and Karan Johar Recreate the Iconic ‘Poo’ Dialogue from K3G at Ranbir Kapoor-Alia Bhatt’s Wedding (Watch Video).

Ranbir and Alia began dating on the sets of Ayan Mukherjee's Brahmastra in 2018 and made their first public appearance as a couple at Sonam Kapoor's wedding in the same year. Their choice of South Africa as their honeymoon destination follows their earlier visit to the country to ring in the New Year. That was when they fell in love with the place and decided to return after tying the knot.

(The above story first appeared on LatestLY on Apr 16, 2022 11:33 AM IST. For more news and updates on politics, world, sports, entertainment and lifestyle, log on to our website latestly.com).