In an attempt to make the holiday experience more wholesome, local holidaymakers and service providers are working in collaboration with hotel associations in Gulmarg, Sonamarg, and Pahalgam to cope with the enthusiastic tourist turnout, with facilities such as constant water, power supply, and snow clearance mechanisms. 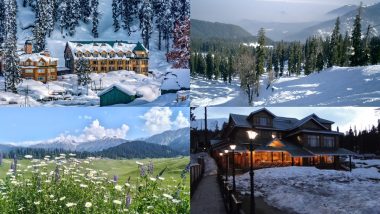 Srinagar, Dec 22: Jammu and Kashmir achieved a remarkable feat of entertaining 1,27,605 tourists in the single month of November 2021, the highest number in the past 7 years versus 6,000 tourists in November 2020. It is a turning point for the tourism industry which is presently planning a grand expansion and promotion of the UT given the stabilised political climate.

Tourists are choosing to celebrate Christmas and New Year's Eve in the picturesque snow peaks under a blanket of stars for the first time in Sonamarg which earlier saw isolation from civilization for 5 months of winter. Christmas and New Year Getaways From Delhi To Make the Best Last Holiday Memories of 2021.

This year more than 5.49 Lakh tourists visited Kashmir up till December first week. Among other reasons, early snowfall in the Valley has definitely pushed more people to cash in on Gulmarg's best reserved ski resort, health resorts, and hotels. Only by December 6, 26,000 tourists have visited! October, a supposed lean month for visitors, witnessed an astonishing footfall of 91,000! It is predicted that with the full house at Gulmarg and Sonamarg at this time of the year, the figure for December alone will touch the 2 Lakh milestone.

Kashmir has a huge potential for rock climbing and is observing the most lively winter season with a particular focus on the local and domestic tourists as the upgraded National Highway to the valley has made travelling possible in such harsh weather conditions.

The UT government is enthusiastic about its 75 new and exclusive tourist spots with infrastructure having provisions for recreational activities, eateries, and other amenities. The Tourism Department is holding road shows across major cities like Chennai, Kolkata, Ahmedabad, New Delhi, Pune, Hyderabad, and Lucknow to raise awareness about the same.

Palpable excitement is bubbling in the rural areas as well. Rural tourism will also be heavily pushed under the same agenda, in the rural circuits of Hokersar-Parihaspora-Gohan in Gulmarg, Waderbala, Nowgam Mawar-Lolab in Kupwara, Chari-Sharief-Doodhpathri-Yousmarg in Budgam, Saderkoot-Payeen-Watlab in Bandipora, and Bani-Basohli-Sarthal and Billawar Duggan in Kathua, to name a few.

The Gulmarg saucer is jam-packed with hundreds of tourists enjoying the Gandola cable car, ice skating, skiing, snowboarding, and sledge rides, as Gulmarg has some of the best slopes in south Asia for these sports. The tourism department is prepared to provide the best facilities and hospitality to visitors as Kashmir is seeing its greatest revival post Article 370.

In an attempt to make the holiday experience more wholesome, local holidaymakers and service providers are working in collaboration with hotel associations in Gulmarg, Sonamarg, and Pahalgam to cope with the enthusiastic tourist turnout, with facilities such as constant water, power supply, and snow clearance mechanisms.

In another news film contracts are also underway as seeing the easy mobility, infrastructure, and stability in the state, Jammu and Kashmir is again climbing the charts in the film industry. And to support this promotion, concessions will be given to film producers by the government. Looks like it will be Christmas all year round for the UT, to say the least!

(The above story first appeared on LatestLY on Dec 22, 2021 05:18 PM IST. For more news and updates on politics, world, sports, entertainment and lifestyle, log on to our website latestly.com).