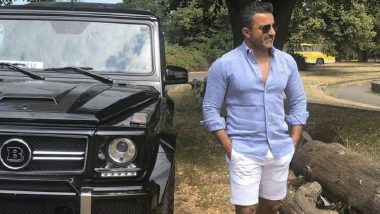 Lebanese-born Entrepreneur Ayman Assi’s life is an illustration of a poignant and effective immigrant success story. The 43-year old entrepreneur was only 20 years old when he emigrated from Lebanon to London. Vehement hopes and unbounded expectations reigned his mind. So, immediately upon moving, he joined a local restaurant as a Kitchen Porter and with that, embarked on his journey to conquer his dreams.

Continuous dedication towards his work brought promotions and a gateway to explore better opportunities, hence Ayman switched his jobs multiple times, finally settling as a Salesman. At this particular position, Ayman’s networking web grew stronger and he decided to share his business model with his partners.

The business model was of a dairy delivery service where products like strained yoghurt and cheese would be sold. The idea was brought to fruition and soon, Ayman had established himself as a keen entrepreneur. However, his yearning to have his own business surfaced and he let his partners supervise this business while he pursued other ventures.

One of the things Ayman found missing in London was his middle eastern cuisine. Thus, he took the plunge of creating a restaurant of his own. The restaurant did not do as well as he had thought and instead, he hit rock bottom. However, he clung onto the pillars of resilience and determination and found his way back with greater will power than before.

To regain his footing, he began working as a Valet at a Valet Parking Service and soon, began his next entrepreneurial venture - this time a Car Rental Company. The company soared high and became a source of encouragement to Assi to explore the unchartered territories he had always wished of.

Consequently, Ayman founded Amerald UK - a luxury concierge company with extravagant services. Overtime, Amerald has accumulated reputable clientele and has now, become renowned for the opulent experience they have to offer to their clients. From VIP escorts to Private Jet Rentals, Furnished Penthouses to Luxury Villas, they provide it all. Currently, Amerald UK is operational in the UK, France, Italy, Spain, Netherlands and Switzerland.