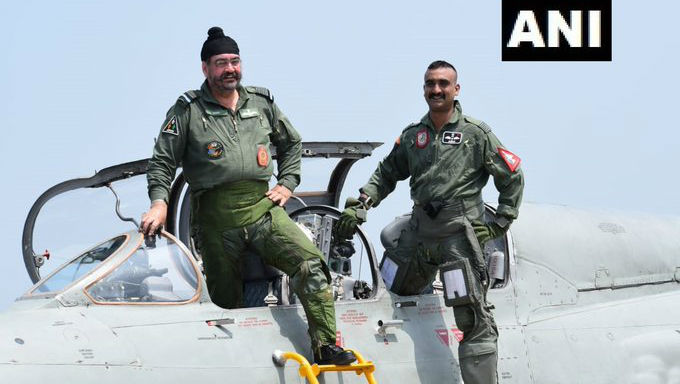 The officer started flying after getting medical clearance. As Varthaman and Dhanoa were captured by the shutterbugs, the Wing Commander kept it simple as he sported a trimmed moustache and a suave hairstyle. While netizens were happy to see the 36-year-old Wing Commander back in action, they were sad not to see the famous handlebar moustache, which had left everyone mesmerised and in awe."Sad to see that he has trimmed his iconic moustache," a user tweeted.

Sad to see that he has trimmed his iconic moustache

"Where is the iconic moustache Mr. #AbhinandanVarthaman ? " wrote another netizen with sad and crying smileys. "The handlebar is gone. But, the style and smile remain. ," a user wrote on the micro-blogging site. IAF Chief BS Dhanoa, Wing Commander Abhinandan Varthaman Fly Sortie in MiG-21 Fighter Aircraft; Watch Video.

Some barber shops had offered customers to sport Abhinandan's signature moustache for free of cost. Even hundreds of people sported the look and became a rage in the country. During Pakistan's counter-attack on India on February 27 in response to the Balakot air strike, Abhinandan had flown a MiG-21 Bison fighter into Pakistan-occupied Kashmir (PoK). IAF Chief BS Dhanoa 'Honoured' to Fly Last MiG-21 Sortie With Wing Commander Abhinandan Varthaman, Says 'Both of Us Have Fought Pakistan'.

Abhinandan had been grounded due to ejection from his MiG-21 which had been shot down in the aerial conflict with Pakistan Air Force F-16s.He was released by the Pakistan government on March 1 as a "peace gesture".