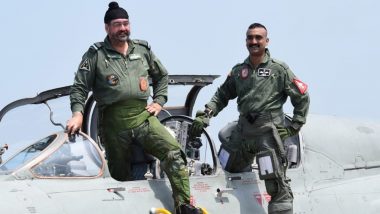 New Delhi, September 2: In a major breakthrough, Indian Air Force(IAF) Chief Air Chief Marshal BS Dhanoa and Wing Commander Abhinandan Varthaman on Monday flew a sortie in a MiG-21 fighter aircraft. According to a tweet by ANI, Dhanoa and Varthaman flew in the trainer version of the MiG-21 Type 69 fighter Aircraft, which was the last sortie of the IAF Chief in a combat aircraft. Varthaman who shot down a Pakistani F-16 fighter jet post-Balakot operations, has resumed flying operations in August after medical clearance.

Reports inform that the officer has been posted at a MiG-21 Bison airbase in the western desert. Abhinandan had been grounded for months due to ejection from his MiG-21 which had been shot down in aerial conflict with Pakistan Air Force F-16s in February this year. Wing Commander Abhinandan Varthaman Clears Medical Test to Rejoin IAF.

According to a tweet by ANI, the Indian Air Force Chief is also a MiG-21 pilot and had flown the planes during the 1999 Kargil war while commanding the 17 Squadron, during the war. During Pakistani counter attack on India on February 27 this year in response to Balakot airstrikes, Abhinandan had flown a MiG 21 Bison fighter into PoK. Pakistan Commando Behind Capture of Abhinandan Varthaman Killed in Firing by Indian Forces Along LoC.

The Wing Commander had fired an R-73 missile to take out the Pakistan F-16 aircraft before his Mig 21 Bison was hit by an AMRAAM missile. 36-year-old Varthaman was captured  and held captive for three days by the Pakistani Army on February 27 after his MiG-21 Bison jet was shot down in a dogfight with Pakistani jets during aerial combat.

#WATCH IAF Chief Air Chief Marshal BS Dhanoa flew a sortie with Wg Cdr Abhinandan Varthaman at Air Force Station Pathankot today in a MiG-21 trainer. It's the last sortie flown by IAF Chief in a fighter aircraft before retirement.They took off around 1130 hrs for a 30 min sortie. pic.twitter.com/retSoI3EVl

In August, the Wing Commander was conferred the Vir Chakra, India's third-highest war time gallantry medal. He was awarded the Vir Chakra for his role in the February 27 operations where India thwarted Pakistani attempts to take down Indian targets in the Naushera sector.

(The above story first appeared on LatestLY on Sep 02, 2019 12:38 PM IST. For more news and updates on politics, world, sports, entertainment and lifestyle, log on to our website latestly.com).