Super moon is a phenomenon when the moon is at the closest point from the Earth. On April 8 night, the moon was 7 per cent larger and 15 brighter than an average full moon. Stunning pictures of the moon have been trending online since last night. We bring to you some of the best ones. 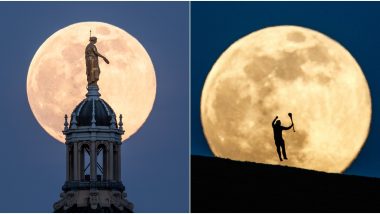 April 8 saw the rise of the biggest and brightest moon of the year, called the Pink Moon. The full moon in the month of April was the biggest supermoon of the year 2020. Stargazers and moon lovers had a great time admiring the beauty of the earth's satellite. Beautiful pictures and videos of the Super Pink Moon 2020 have been shared on social media since last night. Super moon is a phenomenon when the moon is at the closest point from the Earth. On April 8 night, the moon was 7 per cent larger and 15 brighter than an average full moon. Stunning pictures of the moon have been trending online since last night. April Super Pink Moon 2020 Captured From Delhi’s India Gate, View Stunning Pics of the Biggest Supermoon of the Year.

Pink Moon does not appear pink but gets it name from a pink-coloured wildflower bloom seen in US and Canada. The name was given to this moon by the native American tribes who marked the seasonal changes after phases of a moon. So while the moon doesn't appear pink, it definitely appeared larger this time around. If you are someone who loves observing the moon, but for some reason could not catch up on yesterday's celestial spectacle, we give you some wonderful images of April Pink Moon 2020 captured from around the world. April Pink Super Moon 2020 is a Bad Omen Causing Doomsday? NO, It Does Not Begin The End of The World!

WOW! Amazing views of the #supermoon rising tonight! I had to share! #abc7now #SanFrancisco #BayArea pic.twitter.com/0B03VBlISt

Timelapse of the Pink Moon Rising

Time-lapse video of tonight’s #supermoon - the “pink moon” - rising above the Mississippi River as seen from the bluffs in South St. Paul #Minnesota @MPRnews pic.twitter.com/z5VXK4yRaO

I had a feeling it was going to be cloudy tonight, so I got up extra early to catch the #supermoon setting just before sunrise.

The best shot for the #supermoon

Over the Shard in London

#supermoon over the Shard skyscraper in London tonight 📸@Reuters pic.twitter.com/8wqaIJ3CWO

A Video From Views in Asia

Seen the supermoon yet? Here is how the #supermoon looked like in night skies across Asia on April 7. pic.twitter.com/suA9cjqZOu

Amazing right? The moon looked so much fuller and definitely bigger than the other full moons we see every month. Pink Moon is also called as Sprouting Grass Moon, Fish Moon, Hare Moon, and Paschal Moon.

(The above story first appeared on LatestLY on Apr 08, 2020 05:43 PM IST. For more news and updates on politics, world, sports, entertainment and lifestyle, log on to our website latestly.com).