April Pink Super Moon 2020 is a Bad Omen Causing Doomsday? NO, It Does Not Begin The End of The World!

The Pink Moon was once associated with the 'end of the world' phenomenon. Doomsday mongers predicted this celestial appearance will begin a bigger apocalypse in the years to follow. However, let us tell you, these are just some theories with no truth to them. 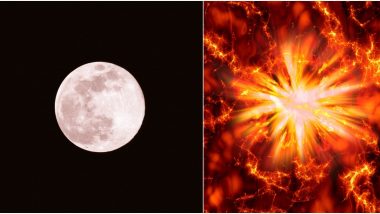 April 8 saw the rise of the Pink Super Moon 2020, the biggest and brightest one of the year. As most people marvelled at the beauty of the bright moon rising in the night sky, the Pink Moon was once associated with the 'end of the world' phenomenon. Doomsday mongers predicted this celestial appearance will begin a bigger apocalypse in the years to follow. However, let us tell you, these are just some theories with no truth to them. The Pink moon is associated with better things like the beginning of spring and beautiful flower blooms. April Super Pink Moon 2020 Captured From Delhi’s India Gate, View Stunning Pics of the Biggest Supermoon of the Year.

Although it is called the Pink Moon, it has nothing to do with the colour of our satellite. It gets the reference of Pink colour from early Native American tribes which indicated the arrival of spring with the blooming of a pink wildflower. A spring flower called Wild Ground Phlox, native to the eastern USA is one of the earliest widespread flowers of Spring. Pictures of the Pink Moon were shared online by people around the world. Will The 4-km Asteroid 1998 OR2 Hit The Earth And Cause Doomsday? NASA Clarifies There is No Need to Worry.

There are enough doomsday conspiracies that are floating on the internet, from alien invasion to the earth being destroyed by an asteroid. The Pink Moon is also linked with a bad omen of beginning the end of the world, with a rise in seismic activity on the planet. The tidal waves do have a link with the phases of the moon and on the day when the moon is closer to the earth's surface, the gravitational pull does cause larger tides in the oceans. However, scientists have assured that pink moon does not cause any devastating effects on the planet. Nor does it affect the tectonic plates.

So, this rare spectacle was once linked to the end of the days but there is no scientific evidence that Pink Moon begins a doomsday for the earth. If you come across any such reports, declaring the Pink Moon a bad omen, do not believe in them.

(The above story first appeared on LatestLY on Apr 08, 2020 12:39 PM IST. For more news and updates on politics, world, sports, entertainment and lifestyle, log on to our website latestly.com).