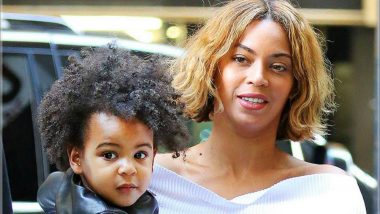 New Delhi, March 19: Beyonce and Jay-Z's daughter Blue Ivy Carter created a viral moment when she threw up bids at an art auction to the tune of $19,000. The 2018 Wearable Art Gala in Los Angeles was organised by Bey's mother Tina Knowles and her husband Richard Lawson to raise money for a non-profit art and performance complex.

The 6-year-old initially bid $17,000 for an acrylic painting of a young Sidney Poitier and then went higher at $19,000. After she raised her hand, Jay-Z jokingly tried to stop her from continuing to bid, drawing laughs. The moment was captured on camera and went viral on social media.

"Her mother and father have been talking about how you gather art and that is a big deal for African Americans," host Star Jones told the crowd. "Listen, you know Ms. Tina told me all of this. Why you think I'm up here talking about it?" "19 for Miss Blue, yes, and she's like, 'I like that,'" she said. Tyler Perry then bid $20,000 and won the art piece.

Beyonce, her younger sister Solange Knowles, their stepsister actress Bianca Lawson and Jay Z's mother Gloria Carter were among those celebrated. The event also saw Blue's handwritten notes celebrating the award winners. One of the notes read: "For my mommy Thank you for my brother and sister[.] Thank you for loving me and Daddy[.] But most of all thank you for being you[.] I love you Blue."