According to the testimony of a teenager who got vacuumed in a plastic bag, he could not move for two hours. 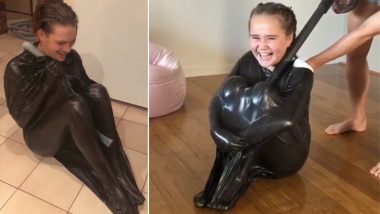 The internet has been witness to all kinds of bizarre and dangerous challenges. And the latest one to enter the list is 'Bin Bag Vacuum Challenge' or 'Trash Bag Vacuum Challenge'. As part of this craze, parents are vacuuming their children inside plastic garbage bags. Videos of teenagers sitting on the floor inside large bags have gone viral on social media. As soon they wrap the bag around them, someone uses a vacuum cleaner to suck the air out of the bag. While the challenge looks quite a fun thing to do, there are also side effects to it. It is dangerous and can even choke a person to death. 'Fire Challenge' on Internet Leaves 12-Year-Old Girl With Severe Burns! Not Just Kiki & Momo Challenge is Dangerous.

According to the testimony of a teenager who got vacuumed in a plastic bag, he could not move for two hours. Eventually, his parents arrived at the scene and rescued him. The problem with the challenge is that once the vacuum sucks the air out of the bag, the person gets stuck inside it. With no air, the plastic holds them tightly making it impossible to move. However, people continue to attempt Bin Bag Vacuum Challenge and videos of more and more teenagers undertaking it are going viral on social media. Deodorant Challenge is New Craze Among Teenagers, UK Mother Warns Against Internet Challenge as Daughter Suffers Burns.

Sharon Leon who got stuck in the plastic bag for two hours was quoted as saying, "I was laying there for 2 hours before my parents came home. "It looks like I'm wearing a leather jumpsuit."

The scariest one of all!

Meanwhile, people took to social media saying that people undertaking the challenge looked like they had worn tight black jumpsuits. While some commented on how dangerous it could be, others said it looked like a way to get into cheap leather jumpsuits. We suggest you to not attempt the challenge considering the threat involved.

(The above story first appeared on LatestLY on May 31, 2019 09:24 AM IST. For more news and updates on politics, world, sports, entertainment and lifestyle, log on to our website latestly.com).