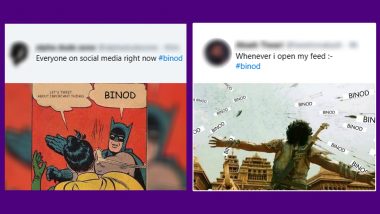 As if your social media wasn't already filled with Binod memes and jokes that we are here with more! Binod is one of the lamest of jokes that went viral for no reason. And since everyone is now talking about it you cannot be spared. For those who still do not know, a video by two YouTubers, Gautami and Abhyudaya who go by the name ‘Slayy Point’ about stupid comments under various videos went viral. However, one of the types of comments they took a dig at was of a person who simply wrote his own name under the most irrelevant video. Abhyudaya talks about these hilarious comments that is so far away from relevance that it is insane. Found under one has seen under the most random YouTube video, all this comment says is the name of the commenter.  Binod Funny Memes and Jokes Are Trending on Social Media but Who Is Binod? Know About This Latest Viral Trend Over YouTube Comments.

A user named called Binod Tharu who just commented ‘Binod’ in the comments section and social media is now filled with hilarious jokes and comments. But for real, what does it take to write such stupid YouTube comments? One can only wonder why would people write some of the most insane things under the most unrelated videos. If there is anything more fun than a YouTube video itself, it has to be the comments section. Some people even write their whole family's name this viral video revealed. But before anything else, let's take a look at some of the funnies Binod memes and jokes:

Whenever i open my feed :-#binod pic.twitter.com/WXl1r8diWP

People Who Have No Idea

#binod seeing the memes on him be like -#binodmemes pic.twitter.com/VUrvSjRb8R

he - Tell me those 3 magical words.

Watch Video of Slayy Point on Why Indian Comments Section is Garbage (BINOD):

Yesterday, #Binod was among the top trends on various social media with funniest memes and jokes and people don't seem to be over it anytime soon. Well, we won't deny that a population want this whole 'Vinod' to end but most people cannot stop LOLing.

(The above story first appeared on LatestLY on Aug 08, 2020 04:02 PM IST. For more news and updates on politics, world, sports, entertainment and lifestyle, log on to our website latestly.com).