The whole thing is worth watching because of its entertaining video as the rapper is decked in a cow printed two-piece while GIFs of boobs, milk cartons, farms and grassy pastures flash behind her. 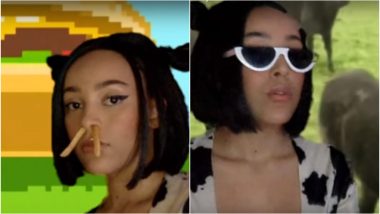 Last week, critically acclaimed R&B singer and rapper Doja Cat released her new music video titled ‘Mooo!’, a song about a cow which has now gone viral and netizens can’t stop humming ‘Bitch I’m a cow’. The whole thing is worth watching because of its entertaining video as the rapper is decked in a cow printed two-piece while GIFs of boobs, milk cartons, farms and grassy pastures flash behind her. While all this is happening, she casually sips on a strawberry milkshake, eats a burger and even stuffs French fries up her nose. The perfectly meme-able content instantly turned into a viral success.

Twitter timelines have been buzzing to the playful catch phrase ‘Bitch, I’m a cow’. She teased a clip of the video on Twitter before unleashing its magnificence to the world on August 10. Folks across the internet are praising the song through a series of memes. The viral summer bop was inspired by a cow-print skirt that Doja Cat featured in the music video.

This really the song of the century aint shit topping this.... got me randomly singing "Moooo" smfh pic.twitter.com/BJqIP7gnBC

Even Chance The Rapper & DJ Khalid are Fans of Doja Cat

As for the music video, Doja Cat made it in her room by using a giant piece of green paper she stuck on her wall. The video took a total of six hours to create, according to the star. In an interview with Paper magazine, Doja Cat said, “For me to make a song about cows, which is obviously kind of out of the box, and for people to pick up on that as something important? It’s insane.” She further added, “It’s refreshing to see that people have a sense of humour.”

(The above story first appeared on LatestLY on Aug 15, 2018 03:56 PM IST. For more news and updates on politics, world, sports, entertainment and lifestyle, log on to our website latestly.com).