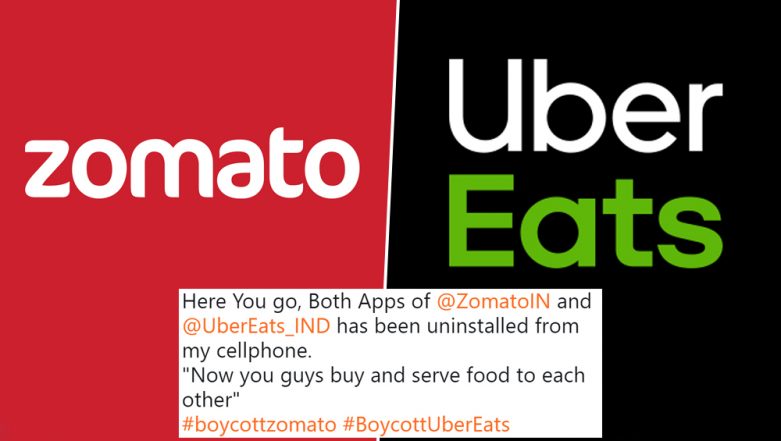 Responding to a bigoted customer who asked for a Hindu food delivery executive instead of a Muslim, Zomato on Wednesday tweeted that 'food doesn't have a religion'. While Zomato's tweet was majorly supported, people also took to Twitter saying that the customer's demand for a Hindu delivery executive should have been met. He had tweeted that as the auspicious Hindu month of Shravan had begun, he did not want his food to be delivered by a Muslim. The incident led to social media feud and #BoycottZomato soon began to trend on Twitter.  And now, rival food delivery app, Uber Eats who supported Zomato's stand is also being slammed online. The app-based food ordering company is facing the wrath of internet users threatening to uninstall their app using the hashtag #BoycottUberEats. Meanwhile, people are cracking jokes on Swiggy who have been tight-lipped on the incident until now. GIFs and funny jokes on how Swiggy would react to the ongoing incident are being shared widely on social media. Uber Eats Backs Zomato For Standing Up Against Bigoted Customer Who Refused Food Delivery From 'Non-Hindu'.

Standing by Zomato, Uber Eats had tweeted saying, "@ZomatoIN, we stand by you." On one hand, when food delivery app Zomato was being inundated with messages of support for their stand, on the other side they are being slammed on social media. And now the wrath has extended to Uber Eats who merely backed a rival organisation's opinion. Enraged social media users took to Twitter sharing screenshots of uninstalling both apps, Zomato and UberEats from their phones.

Here is What the Customer Demanded From Zomato: 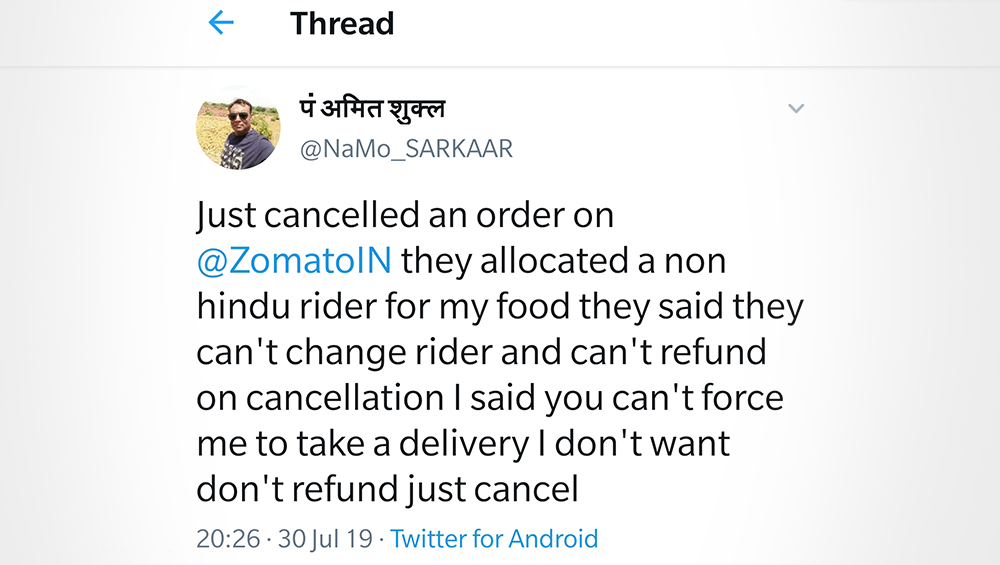 Here You go, Both Apps of @ZomatoIN and @UberEats_IND has been uninstalled from my cellphone.

Many shared videos of uninstalling both the apps from their phones.

#BoycottUberEats #boycottzomato #IStandWithAmit U PPL r losing premium customers like me ,I used to give 10 orders per month but not from @Zomato and @UberEats_IND fro. Yesterday pic.twitter.com/7p0rWmYd8t

Zomato Has Been Rated Terribly Low on Playstore:

Both Continue to Face the Heat:

Zomato is Being Accused of Being Biased in Their Opinion:

Bye bye @ZomatoIN because of your hinduphobic policies

People are boycotting ubereats and zomato

Swiggy Being the Audience!

As the fight on continued on social media, Zomato issued a detailed statement explaining why they believe that 'food does not have a religion'. Defending themselves they said that the company respects every religion and is not biased towards any. For the same reason, they have tags like 'Jain food, vegan food and Navratra thalis' so that people can easily select food of their preference.