Video of the incident in Southern California went viral with social media users praising him for his act. 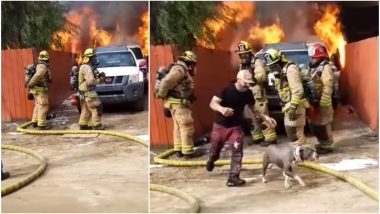 We have heard of innumerable stories of dogs saving the life of their humans from fire and other similar incidents. There have also been cases of these animals laying down their lives to save those of others. They are just selfless and go upto any measure to save their favourite people. While we often come across these kinds of stories, recently a man in the United States went running inside his burning house to bring out his dog safely. Video of the incident in Southern California went viral with social media users praising him for his act.

The man who was identified as Jose Guzman told PEOPLE that he doesn't regret risking life for his two-year-old blue nose pit bull named Gabanna. In the video, the firemen can be seen telling Jose not to go inside, however, he pays no heed and rushes inside. He said, "I knew something could've happened to me or both of us, but it didn't go through my mind at the time. That dog is part of my family. She's been with us through downs and ups and I couldn’t leave her there. I would do it again if I had to; I would do it for anybody in my family." The video is being widely shared on the internet with animal lovers from around the world commending his altruistic act. New York Dog Dies Saving Couple From Massive Fire, Owners in Deep Pain.

Reportedly, he was going for lunch at his parents' house when a neighbourhood house caught on fire. But, later it spread and his own house started burning. At the time of the incident, the dog was alone at home, hence he had to rush inside to get his pet out safely. He found Gabbana inside the bathroom, the only place where it was not burning; she had curled beneath the toilet, said Jose. Hero Cat Saves Her Florida-Based Family From Carbon Monoxide Poisoning!

Jose suffered second-degree burns to his face, arm, and left ear and is healing. Gabanna also experienced burns to her nose and paw and is yet to be completely recovered. Meanwhile, their home, two cars and other belongings were lost in the fire. The incident was caught on camera by his landlord's son-in-law. Those wishing to help the family can donate through this GoFundMe page.

(The above story first appeared on LatestLY on Mar 15, 2019 08:13 PM IST. For more news and updates on politics, world, sports, entertainment and lifestyle, log on to our website latestly.com).