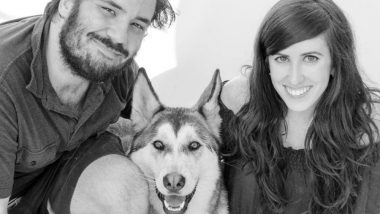 A dog in New York died saving his owners after a fire broke out in their apartment. Rikku, a Husky alerted his owners about the fire helping them to leave the building on time, but unfortunately couldn't save himself. Quinn Demarest and Monica Molina were sleeping in their first-floor apartment when Rikku woke them up.

New York City Fire Department said that a two-alarm fire broke out on the second floor of a five-storey building in Manhattan's Upper West Side at 1.35 am on Friday. According to the New York Post, the couple were saved as their pet dog alert them about the fire on time. After learning about the blaze, the couple left the apartment, pulled an alarm and started knocking on doors of neighbours. By that time the building was filled with smoke and people had to leave immediately. Pet Dog Saves Girl From Getting Raped In Sagar District of Madhya Pradesh; Accused Arrested By Police.

Demarest told NYP, "He woke us up, I helped my fiancée out. (Rikky) let us knock on the doors and set off the alarm that saved everyone. I came back, but the fire was too big. I couldn't get him out." Demarest came back for the dog, but couldn't rescue the pet as the flames were too large. The report said that the couple is heartbroken and were not in a condition to speak more about their loss. Gujarat: Dog Saves Shepherd’s Life From Three Lions in Amreli's Ambardi Village.

Their neighbour Eve Lederman was quoted as saying, "I heard screaming from the hallway. I was like whatever, but then I kept hearing the screaming, I turned on my light just to see what's going on, and there was just water everywhere, black smoke. 106 firefighters and EMS workers strived to bring the fire under control. Seven civilians and one firefighter who was injured in the fire were rushed to the hospital. The cause of the blaze has not been determined yet.

(The above story first appeared on LatestLY on Mar 03, 2019 10:35 AM IST. For more news and updates on politics, world, sports, entertainment and lifestyle, log on to our website latestly.com).