The report says, Queen Elizabeth II announced on Saturday that Duchess of Cornwall, Camilla will wear the 105.6-carat Kohinoor Crown after Prince Charles becomes the King. Queen mother made the grand announcement during her 70-year anniversary of her accession to the British throne. 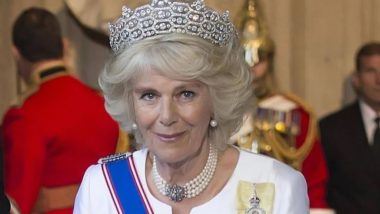 Queen Elizabeth II marked 70-year anniversary of her accession to the British throne this week. Reports says, Queen Mother announced her sincere wish that Prince Charles’ wife, Camilla Parker Bowles, the Duchess of Cornwall will be given the royal Kohinoor crown when Prince Charles ascends the throne. The 105.6-carat crown which features 2,800 diamonds was created for King George VI’s coronation in the year 1937. Originated in India, in a platinum mount, the famous Kohinoor diamond crown will be soon given to Camilla who would be styled as the 'queen consort'. Queen Elizabeth Receives Royal Gun Salutes For Her 70-Year Reign (Watch Video).

The royal crown features a purple velvet cap and ermine trim. Moreover, the beautiful Kohinoor diamond was firstly set in the crown of Queen Alexandra and then transferred to Queen Marry in 1911 and was finally reset on the crown of Queen Mother (Queen Elizabeth II) in 1937 for her coronation as consort. As per the reports, "recognizing the sensitivities, when the couple married in 2005, the royal family announced that Camilla would be known as Princess Consort after Charles became king". Camilla and Prince Charles' relationship is highly publicised in the media and is under worldwide scrutiny. The sources explained that the Queen Mother said, "it is my sincere wish that, when that time comes, Camilla will be known as Queen Consort".

News reports say that Queen Mother officially announced Camilla's coronation on the momentous day to carry forward long established tradition. Kohinoor has a long history that dates back to the independence era of India.  The Kohinoor is now on show in the Tower of London among the crown jewels. It came out briefly during the Queen Mother’s funeral on April 9, 2002. As reported, the priceless platinum and diamond crown will be placed on Camilla's head when Prince Charles becomes king.

(The above story first appeared on LatestLY on Feb 08, 2022 04:00 PM IST. For more news and updates on politics, world, sports, entertainment and lifestyle, log on to our website latestly.com).