Cyclone Amphan caused a catastrophe in Odisha and West Bengal earlier this week. Among the disaster caused was a 270-year-old Great Banyan Tree in the Indian Botanic Garden in Howrah. The cyclone uprooted part of the tree resulting in a hole in the northwest corner of the tree. The tree is had lost its main trunk to cyclones in 1864 and 1867. 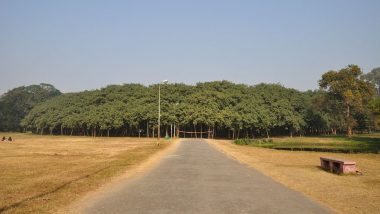 Cyclone Amphan caused a catastrophe in Odisha and West Bengal earlier this week. Among the disaster caused was a 270-year-old Great Banyan Tree in the Indian Botanic Garden in Shibpur, Howrah. The cyclone uprooted part of the tree resulting in a hole in the northwest corner of the tree. The tree is located over 4.67 acres in the garden; it had lost its main trunk to cyclones in 1864 and 1867. after which the main trunk had to be amputated in 1925. The old tree has spread its branches and roots so wide and far that it looks like a dense forest. Cyclone Amphan Fury in WB: Restoration Work by NDRF Underway After Trees, Traffic Signals Get Uprooted, Mamata Banerjee Says 'Situation More Worrying Than COVID-19 Pandemic'.

Other than damaging the old tree, the cyclone uprooted some 1,000 trees in the garden. The botanic garden has around 15,000 trees and is home to 12,000 varying specimens. The Kalpavriksha was the third most popular and visited the tree in the Indian Botanic Garden after The Great Banyan Tree and The Double Coconut Tree. Mad Tree is another species on which no single leaf looks the same. Amphan Cyclone: Here’s How and From Where the Super Cyclonic Storm Got Its Name.

Talking about the damage, Botanic Garden director Kanak Das told The Times of India, "The garden is devastated. It will take at least four-five days to assess the loss. But from what we have seen, the damage is substantial. Mad tree, Kalpaturi tree, several Mahogany trees of famous Mahogany Avenue, a large number of casurina and old pine trees are among the ones that were flattened. It is one of the saddest days of my life." Most of the garden has been devastated by the winds. Trees are either uprooted or broken from the middle of its trunks.

TOI quoted Sudhin Nandy, the official in-charge as saying, "The damage that the cyclone has caused nine hours won’t get compensated in nine years. We have checked out the damage and begun work to clear it. Trees that lie on the jogger’s track can be cleared within a few days. But the rest will take over a week."

Cyclone Amphan which wreaked havoc in parts of West Bengal and Odisha, claimed at least 10-12 lives. Thereafter it weakened into a cyclonic storm and moved towards north-northeastwards. Cyclone Amphan made landfall in West Bengal on Wednesday caused damages in Kolkata, Howrah, Hooghly, North and South 24 Parganas districts and surrounding areas. The cyclone also caused havoc in the coastal districts of Odisha. Over 1.5 lakh people have been evacuated from low-lying areas and thatched and mud houses to cyclone shelters during Amphan.

(The above story first appeared on LatestLY on May 22, 2020 06:29 PM IST. For more news and updates on politics, world, sports, entertainment and lifestyle, log on to our website latestly.com).