Electricity Restored in Parts of Mumbai, Funny Memes and Jokes on Twitter Are Lit With Netizens Being Relieved Following Major Power Outage!

Electricity is now restored in parts of Mumbai. It was obvious for the same social media users to tweet more memes and jokes about the same. The memes are surely lit with netizens being finally relieved for the electrical supply getting restored. 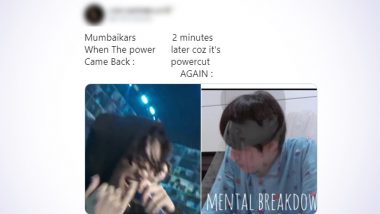 Mumbai was on pause for more than two hours after the city faced major power outage. The outage, according to Mumbai’s supply board was because of the “TATAs incoming electric supply failure.” Even the traffic signals in some areas reportedly stopped working. In a bid to keep up with the positivity, amid power outage, netizens flooded their social media timeline with funny memes and jokes. According to the latest updates, electricity is now restored in parts of Mumbai. It was obvious for the same social media users to tweet more memes and jokes about the same. The memes are surely lit with netizens being finally relieved for the electrical supply getting restored.

The Maharashtra government reported that it is restoring power in phases so as not to trip the grid again. While the supply has been restored in some parts of the financial capital, others are still with no electricity. Some citizens even experienced electricity supply for only a few minutes before affected by outage again. Electricity or not, the memes are here to entertain you, and they are, by far the best. While we struggle in the October heat, desperately waiting for the electricity to get resumed across the city so that we all can, finally begin our work from home, let us check out the best reactions as the supply is starting to come back in certain parts.

Now it's time to sleep in Air conditioning room#powercut #powerback

When The power later coz it's

Vasai Virar power is ON

It's An Everyday Story in Villages

Le Mumbaikars : This power cut is making things so dark it’s getting on my nerves now.

People in Assam after seeing Mumbaikars rages against #powercut pic.twitter.com/qqGCURiMMb

Power is Back in Parts of the City

Aren’t they hilarious? The massive power outage in the morning was sure a surprise, but we were all prepared for the memes to hit the internet. Don’t we? After all, humour is the best way to deal with almost any problems we face.

(The above story first appeared on LatestLY on Oct 12, 2020 01:32 PM IST. For more news and updates on politics, world, sports, entertainment and lifestyle, log on to our website latestly.com).