Elon Musk Shares First Pic of Son X Æ A-12 but It’s the Meaning of Baby Boy’s Name That Got Netizens Excited! Funny Memes and Jokes Take Over Twitter 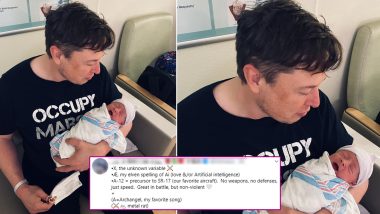 Elon Musk and his partner, Grimes (real name Claire Elise Boucher), have just welcomed a baby boy. As much happy the world is, people just cannot get over by the name. Ever since, the Tesla CEO revealed the name of the new member; the internet was filled with discussion and memes. Musk and Grimes told fans their son's name is X Æ A-12. At first, we thought, they were just messing up with us, but turns out they are serious. X Æ A-12 is the real name of the baby boy. The new mom, has also explained the meaning of their baby boy’s name. The meaning of the baby boy’s name got netizens excited. People on Twitter congratulated the new parents, but also could not control themselves from making funny memes and jokes over the name which is a confusing string of letters, numbers and symbols. X Æ A-12 Musk Is Elon Musk and Girlfriend Grimes Baby Boy's Name and Here's The Meaning and Its Pronunciation!

Musk is no stranger in creating attention on social media. He is extremely active and frequently interacts with the public, instead of only posting about SpaceX or Tesla. He continues to make jokes and statements, which many find random. So, when Musk announced the name of his baby boy, X Æ A-12, people really did not take it seriously that it is the little one’s name. The CEO of SpaceX also shared the first picture of his baby boy, and he is too adorable.

But fans just cannot get over by the name and wonder, what really has made the parents keep it that way. The first photo of X Æ A-12 taken and shared by Musk was not a traditional meme. But he went on, adding a face filter to the baby boy’s face.

Since people cannot get over by the name and X Æ A-12 is one of the top trends on Twitter, Grimes took the opportunity to share the meaning of the name. Honestly, it is just made everything weirder.

•Æ, my elven spelling of Ai (love &/or Artificial intelligence)

•A-12 = precursor to SR-17 (our favorite aircraft). No weapons, no defenses, just speed. Great in battle, but non-violent 🤍

Did You Try It?

me trying to pronounce that babys name : pic.twitter.com/j8GUZlz5Qd

IS THIS REAL GRIMES pic.twitter.com/quFFJfNEkZ

X Æ A-12 arriving to his first day of school: pic.twitter.com/9t1T0XpLZl

X Æ A-12 when he goes to sleep pic.twitter.com/anv4mVJNOO

Like most trends on the internet, this will most likely be something that is popular to joke about for a few days. The jokes are not meant to be harsh towards Musk and his family, but showcasing how odd the choice of the name is. Amid the pandemic, it was really good news that came in from the family, and the name was a much-needed distraction. Congratulations to Musk and Grimes!

(The above story first appeared on LatestLY on May 06, 2020 09:16 AM IST. For more news and updates on politics, world, sports, entertainment and lifestyle, log on to our website latestly.com).