A heartbreaking video of an endangered sea turtle trying to feed on sewage has gone viral on social media. The clip shows the green turtle with its head inside a sewage pipe. 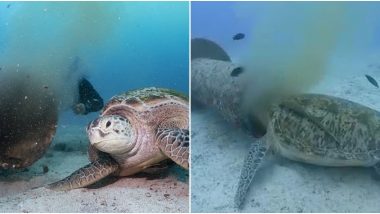 A heartbreaking video of an endangered sea turtle trying to feed on sewage has gone viral on social media. The clip shows the green turtle with its head inside a sewage pipe while feeding on waste pouring out in the sea. Scuba diving instructor Charn Joon Park spotted the condition the female sea turtle was living in while diving with friends along Bolabog Beach in Boracay, Philippines. Endangered Sea Turtle Returns to Lay Eggs on Maldives Beach, Finds Maafaru Runway Instead (View Heartbreaking Picture)

After testing the water, Department of Environment and Natural resources said that it tested positive for Coliform bacteria, usually found in faeces. The video also showed several tropical fish feeding on the pollution as they swim ahead. The  International Union for Conservation of Nature (IUCN) enlists green sea turtles as endangered and are hence protected in most countries. 8 Interesting Facts About Sea Turtles.

Several divers and residents also complained to the local officials about the apathy of the sea creatures in Boracay Island. After the video began to be shared widely on social media, Environment Undersecretary Benny Antiporda said the Pollution Adjudication Board (PAB) has initiated an investigation into it. Turtles From All Seven Oceans in The World Have Microplastics in Their Body! New Study Reveals Shocking Extents of Plastic Pollution.

The Environmental Management Bureau Region 6 later issued a cease and desist order against Boracay Tubi System, Inc. (BTSI) to address the issue. Exploited by tourism, the islands and its marine life has been long affected by pollution. Following increased levels of pollution in the seawater, Boracay Island was temporarily closed from April to October 2018. While the island earlier used to receive around two million visitors, it has now significantly reduced. However, the condition of water-based animals continues to be terrible.

(The above story first appeared on LatestLY on Sep 25, 2019 09:04 AM IST. For more news and updates on politics, world, sports, entertainment and lifestyle, log on to our website latestly.com).