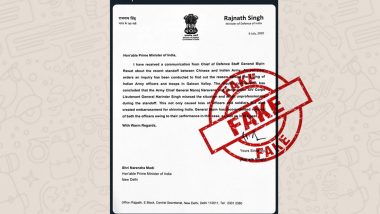 The fake letter dated July 6, carries an official logo of Defence Ministry and Singh's signature. The letter read, "I have received a communication from Chief Defence Staff about the recent standoff between Chinese and Indian Army. As per orders, an inquiry has been conducted to find out the reason behind the killing of Indian Army Officers and Troops in Galwan Valley." Government to Lodge FIRs Against Journalists of News Portals Not Registered With RNI? PIB Fact Check Debunks Viral WhatsApp Message.

Previously there were news of Gen Bipin Rawat demaning Corps commanders of his own choice, this letter shows hatred he has in heart against Commander 14 Corps pic.twitter.com/o2M8r2vDIU

It added, "The inquiry commission concluded that the Army Chief General Manoj Mukund Naravane and Commander Corps XIV Lieutenant General Harinder Singh misread the situation and acted unprofessionally." The fake document also claimed that General Rawat demanded the removal of both the officers.

The PIB Fact Check in a tweet said, "Claim: An alleged letter, in circulation on Social Media, from Defence minister to PM on some recommendation related to defence matters. #PibFactCheck: It's #Fake. No such letter has been written. Please beware of mischief mongers."

Claim: An alleged letter, in circulation on Social Media, from Defence minister to PM on some recommendation related to defence matters.#PibFactCheck: It's #Fake. No such letter has been written. Please beware of mischief mongers. pic.twitter.com/JJaQ8dGkTF

The Galwan clash took place on the intervening night of June 15-16. In the violent face-off with troops of the Chinese Army, 20 Indian Army soldiers, including a commanding officer, were martyred. According to reports, 45 soldiers of the Chinese Army were severely injured or killed in the clash. However, China did not confirm the number of casualties suffered by its Army.

(The above story first appeared on LatestLY on Jul 13, 2020 02:14 PM IST. For more news and updates on politics, world, sports, entertainment and lifestyle, log on to our website latestly.com).