An image showing of an old man working in an umbrella repair shop is doing rounds on various social media platforms with the claim that the elderly man is Muthu Meera Lebbai Maraikayar, the brother of late former-President of India Dr APJ Adbul Kalam. Fact check shows that the claim is fake. 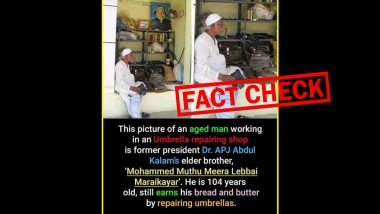 New Delhi, July 14: An image showing an old man working in an umbrella repair shop is doing rounds on various social media platforms with the claim that the elderly man is the brother of late former-President of India Dr APJ Adbul Kalam. Several viral posts claim that the image shows Mohammed Muthu Meera Lebbai Maraikayar, Dr Kalam's elder brother, is over 100 years of age and still 'earns his bread and butter by repairing umbrellas.' The image of the old man, claimed to be Muthu Meera Lebbai Maraikayar, is being widely circulated and shared on the digital platforms. Fact Check: Old Image From Manali Shared As Recent Photo of Crowds; Here's The Truth Behind The Viral Photo.

However, a fact check has found out that the claim being made in the viral image- the old man is Dr APJ Adbul Kalam's elder brother, is fake. It does not belong to Muthu Meera Lebbai Maraikayar. In fact, Maraikayar passed away in March this year owing to age-related illness at the age of 104 years. He served as a trustee of the APJ Abdul Kalam International Foundation according to its official website. Fact Check: Viral Video of MiG Aircraft Landing on Dam Is Not Real! Stunning Animation Is Created With Help of Digital Combat Simulator.

The image is being widely circulated on Facebook and Instagram, however the claim being made is fake. It does not belong to Muthu Meera Lebbai Maraikayar. Social media has became a playground of fake claims on various issues. Any information, whether true or not,can easily go viral on online platforms. People are advised to not rely on unverified sources and cross check any such claim before circulating it on social media.

The claim is fake. Muthu Meera Lebbai Maraikaya passed away in March this year.

(The above story first appeared on LatestLY on Jul 14, 2021 10:24 AM IST. For more news and updates on politics, world, sports, entertainment and lifestyle, log on to our website latestly.com).