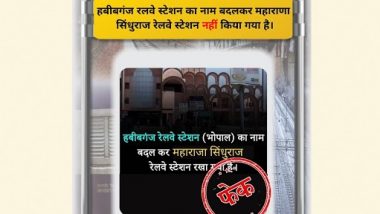 Dismissing the fake claims, a fact check by the Press Information Bureau (PIB) has found out that the claim being made in the viral message is fake. It added saying that the Ministry of Railways has not made any such decision in changing the name of Habibganj railway station to Maharana Sindhuraj railway station. "No such decision has been taken by the Railway Ministry regarding the renaming of Habibganj Railway Station", it added. Madhya Pradesh's Hoshangabad District to Be Renamed as Narmadapuram.

The government has time and again warned people of such fake and misleading information. Fake news is spreading like wildfire on social media platforms. People are advised to rely only on the competent and relevant government authorities for any such announcement to avoid being misled.

This claim is fake as the Rail Ministry has not taken any such decision regarding the renaming of Habibganj Railway Station in Bhopal.

(The above story first appeared on LatestLY on Jul 19, 2021 04:41 PM IST. For more news and updates on politics, world, sports, entertainment and lifestyle, log on to our website latestly.com).