A diving expedition turned into a discovery of mammoth proportions for two scuba divers in Florida. Derek Demeter and Henry Sadler uncovered a 4-foot, 50-pound mammoth bone at the bottom of the Peace River on April 5th. 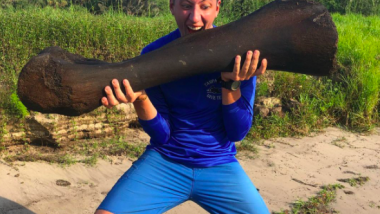 A diving expedition turned into a discovery of mammoth proportions for two scuba divers in  Florida. Derek Demeter and Henry Sadler uncovered a 4-foot, 50-pound mammoth bone at the bottom of the Peace River on April 25th. It's been reported that the fossil could possibly be tens of thousands of years old. A 100- million-old dinosaur bone discovered in Meghalaya

This is not the first time the pair have dived into the deep waters in Florida to find ancient remains of mammoths. The pair, who fancy themselves as amateur palaeontologists, often undertake diving expeditions in search of ancient remains. A quick perusal of Sadler's Instagram account would suggest that Sadler is quite the explorer. However, last Sunday he hit the motherload when he along with Derek Demeter discovered an ancient Mammoth femur dating back to the ice age.

Here's what Derek Demeter, Seminole State Planetarium's director, had to say about the discovery.

"My friend @thinkseek and I undercovered this giant Columbia mammoth leg bone (humerus) this weekend while scuba diving in the Peace River. It weighs a ton but incredible discovery! In Florida between 2 million to 10,000 years ago Florida had these giants roam the prehistoric savannah grasslands."

Henry Saddler couldn't contain his excitement either.  Here's what he had to say on the discovery of a lifetime.

"I was fortunate enough to find two amazing once in a lifetime fossils yesterday. This is the first, come back tomorrow to see the rarest fossil you can find in Florida. Pictured here is a Colombian Mammoth leg bone, and while not as rare as the other thing, it is still an incredible find. Amazingly, it is almost completely undamaged and very well mineralized. Huge shoutout to @derekthediscoverer for helping me unearth this beast."

Along with the Mammoth femur, the pair also uncovered parts of an extinct shark and the tooth of a sabre-tooth tiger.

"It’s only the top third of the tooth, and yet it’s breathtaking!"  Sadler, a middle school teacher in St. Petersburg, added on the page.

Of course, the discovery quickly went viral and people just couldn't keep calm. Here are some of their reactions. 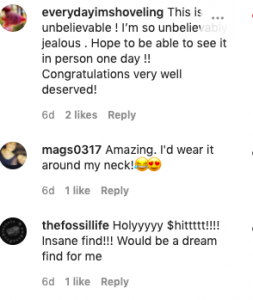 The discovery is presently in a classroom where Sadler teaches. "It's currently sitting in the classroom where the kids are able to see it, touch it, feel it and really get a history of the natural world," Sadler told Fox 35.

(The above story first appeared on LatestLY on May 05, 2021 04:06 PM IST. For more news and updates on politics, world, sports, entertainment and lifestyle, log on to our website latestly.com).