As Gmail, YouTube, and other Google services go down, netizens post funny memes and jokes on Twitter, while waiting for the tech-giant to resolve the outage. 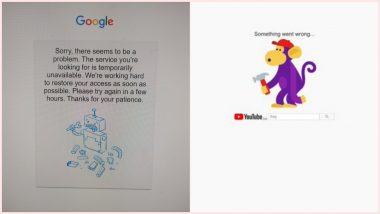 Google’s email servicing is not responding. Also, the video-sharing platform, YouTube is not working too. Some reported other google services are down as well. The platforms are not only unresponsive in India, but many countries across the world. As of now, it is not revealed as to why people are facing technical glitches, but users were quick to complain on Twitter. As Gmail, YouTube, and other Google services go down, netizens post funny memes and jokes on Twitter, while waiting for the tech-giant to resolve the outage. The reactions, like every time, are hilarious, and since we are almost at the end of 2020, it was obvious for people to create more memes on that as well.

For Gmail, users are unable to send mails, load chats and more. On YouTube, the platform reads, “Something went wrong.” Other Google services are also facing technical glitches. Gmail, being the most-used platform, especially at workplaces, received a large number of reactions on social media, since the app faced error. The applications turned more essential after the outbreak of COVID-19, as a major section of the white-collared workforce is working remotely. According to Down Detector, the Google services went down at around 5:00 pm. Let us check, how netizens are reacting to the technical errors.

It's Monday & Gmail is down. That means I can go home right? pic.twitter.com/fkwp9QATrH

Me when I run to twitter to see whether #Gmaildown pic.twitter.com/k4XXfCx6gf

how I feel 2 minutes after finding out that many google services are down #YouTubeDOWN #gmaildown pic.twitter.com/LlWMLLN1RG

As of now, it is not known, as to why Gmail, YouTube and other Google services are not responding. The technical glitch is yet to be fixed, and what caused the error is unknown. More reports on the same is awaited.

(The above story first appeared on LatestLY on Dec 14, 2020 05:49 PM IST. For more news and updates on politics, world, sports, entertainment and lifestyle, log on to our website latestly.com).