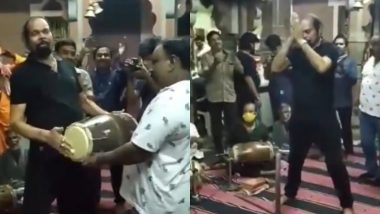 Vadodara, September 20: Amid the rise in coronavirus cases in the country, Gujarat's BJP legislator Madhu Shrivastav was caught on camera for flouting the safety protocols in Gajrawdi area in Vadodara. He was seen singing bhajans along with his supporters inside a crowded temple without wearing a mask.

According to a report, published in the Indian Express, the BJP leader was seen singing bhajans and dancing in front of the crowd in the temple situated in Gajrawdi area in Vadodara. Shrivastav had recently recovered from COVID-19. Apart from two musicians, no one could be seen wearing a mask inside the temple. Even the priest was seen singing bhajan without wearing a mask. Following this, the video went viral. Fined For Not Wearing Mask in Car, Delhi Lawyer Seeks Rs 10 Lakh Compensation For 'Mental Harassment'.

Gujarat BJP MLA, who recovered from Covid, dances inside temple without mask pic.twitter.com/noLOpmDQ31

Asked to react on the issues, Shrivastav said, as quoted by the daily, "The video of me dancing in the temple is true. I do it every Saturday. I went there yesterday as I have been going since over 45 years. This is not anything new. I have not flouted any guidelines because the government has allowed gatherings. There is circular regarding the same. There were just a few people and it was my private gathering." Adding more, he said, " own this temple. There is no need for any masks inside a temple. I sing bhajans on my own as I have been doing since several years."

It is to be known that Shrivastav was tested positive for Covid-19 towards the end of August and was hospitalised for over a week. He was released a few days ago.

(The above story first appeared on LatestLY on Sep 20, 2020 04:24 PM IST. For more news and updates on politics, world, sports, entertainment and lifestyle, log on to our website latestly.com).