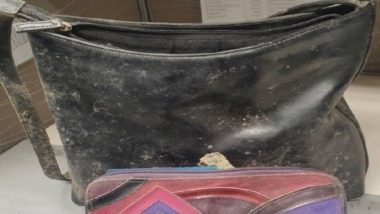 Moree, August 8: The Moree Police in New South Wales were handed over a handbag this week, which after linking its identifying features, is believed to be the same bag that was reported stolen back in July 2004. Cited by the publication Moree Champion, the handbag was found at the back of one of the oldest, and largest fashion boutiques in rural New South Wales -- Assef's car park by some building workers in the area.

Found after more than 16 years, the handbag was believed to be stolen from the back of the owner's car which was parked near the Heber and Auburn Street intersection. Back then, a few days later after the incident, some of the contents of the bag were recovered near the Moree railway station. Angry Bangaluru Employee Gives Boss' Number to Escort Services & Orders Sex Toys for His Family After Delay in Provident Fund Release.

However, now, after many years, the handbag and the majority of its contents were located in Assef's car park. Moree police officer-in-charge Inspector Martin Burke said this goes to show why it's so important for people to report lost or stolen items.n"The moral of the story is that it's important to report this stuff, lost or stolen because there's a greater opportunity to link it up with you if they're found later," Moree Champion quoted Inspector Burke as saying.

"There were enough identifying features of this handbag that we have been able to confidently link it to the bag that was stolen in 2004. It shows that if you report things, there is an opportunity down the track to be reunited with those items. Meanwhile, the police team is trying to reach and make contact with the owner of the handbag.