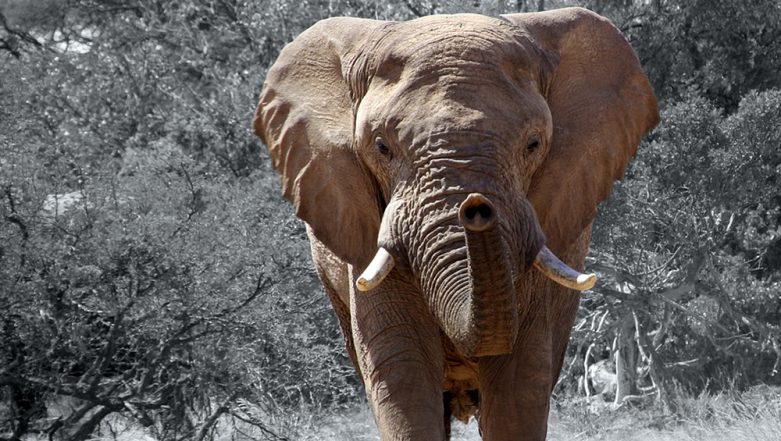 A devastating picture of an African elephant captured by documentary filmmaker Justin Sullivan shows the sad reality of poaching in Botswana. The picture shows a dead elephant with his severed trunk lying next to it. The horrifying drone image titled 'Disconnection' has drawn a lot of attention after the picture came up online. The giant dead beast was abandoned after it was killed brutally by poachers for ivory hunting. This photo also draws attention to the lift on hunting ban in Botswana recently. The image overall highlights the shocking condition of poaching in the country. Couple Kiss With a Massive Dead Lion They Killed to Show Off Their Trophy Hunting Skills in South Africa, View Shocking Pic!

The shocking picture has also been selected for the Andrei Stenin International Press Photo Contest. The photo reveals that the poachers used a chainsaw to separate the trunk and tusks from its body and then left it as it is. Sullivan who was in Botswana shooting overheard some rangers talking about a poached elephant, "They said an elephant had just been poached and I asked to be taken to the site. On arrival I used a drone to capture the image." Rhino Poachers Killed After Crashing into a Goat While Fleeing From Park Rangers in Zimbabwe.

Mr Sullivan very aptly titled the image as disconnection, highlighting the human-wildlife conflict, which has only grown in recent years. Botswana which boasts of having the largest population of elephants lifted the five-year ban on elephant hunting in May 2019 citing that the large beasts destroy a lot of crops. The decision has already become an international controversy with conservationists opposing it.

The powerful photograph shows the reality of poaching since just a month of lifting the ban. Research by Elephants Without Borders revealed that nearly 400 elephants were killed in just the last 2 years even when the ban was on. Now that its officially lifted, the number of killings will only rise.