Park rangers tracked the four poachers resulting in a high-speed chase between poachers and rangers. 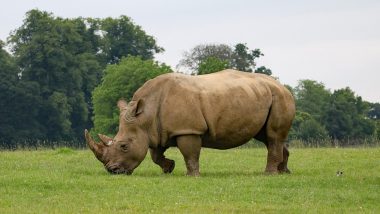 Two suspected rhino poachers in Zimbabwe died after their car overturned while trying to escape from rangers. However, Park rangers tracked the four poachers resulting in a high-speed chase between poachers and rangers. In the incident, their car hit a goat and overturned. The incident occurred last week at Bubye Valley Conservancy on the outskirts of the southern town of Beitbridge, located near the border with South Africa. While two of the poachers survive, the other two, Godfrey Makechemu and Charles Runye died due to the injuries. Rhino Poacher Gets Killed by Elephant, Body Eaten by Lions in South Africa's Kruger National Park.

Independent quoted Prosecutor Misheck Guwanda as saying, "Acting on a tip-off, a police mobile unit saw the suspected poachers coming out of Bubye Valley Conservancy and heading towards a nearby Jopembe village and pursued them." Prosecutors said the track the men followed showed they were following a rhino. At the site of the collision, a rifle with telescopic sight was found. The two poachers who survived included 41-year-old James Mauto and 35-year-old Celestino Shate. They were in custody on suspicion of poaching and will appear in court on June 28. Sudan, World's Last Male Northern White Rhino Dead: 7 Animals That Went Extinct in Last Two Decades Courtesy Us!

According to a report in Eyewitness News, the four men were part of an alleged poaching gang that hunts rhinos at the Bubye Valley Conservancy. The rhino is targeted in the illegal wildlife markets for its horn which can fetch them thousands of dollars. Police arrived at the scene to find the four men at the inside their car. According to EWN, rhino in Bubye Valley Conservancy are under threat from poachers. The rhino is targeted for its horn, which can fetch tens of thousands of dollars in illegal wildlife markets.

According to data from the International Rhino Foundation (IRF), since 2000, more than 750 rhinos have been killed by commercial poachers in Zimbabwe. According to a report by The African Conservation Telegraph, Zimbabwe's black rhino population was lesser than 400 in the country in 1993 before poaching was put under control, but now is around 475.

(The above story first appeared on LatestLY on Jun 20, 2019 05:16 PM IST. For more news and updates on politics, world, sports, entertainment and lifestyle, log on to our website latestly.com).