A hunter from Ontario has captured videos which records strange audio from the woods. It records something howling and screaming which has left everyone including the forest authorities wondering what it could be. 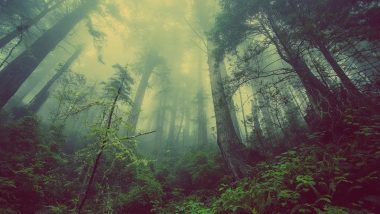 Forest woods are home to many living beings, from tiny insect to smaller animals. Unless it's a dense forest, then there is a possibility of wild creatures. But a hunter from Ontario has captured videos which record strange audio from the woods. It records something howling and screaming which has left everyone including the forest authorities wondering what it could be. Even biologists are unable to figure out what creature made that howl and scream of a combination from the distant woods. The videos are going viral and people are making wild guesses, some even wondering if its anything supernatural. Record-Breaking Alligator Caught by Hunters in Georgia! Video of 14-foot-long Reptile Goes Viral.

Gino Meekis, a hunter recorded two videos of these strange sounds coming from the woods. He was out in the woods with his wife and grandson,  looking for a grouse (a large bird). They heard some strange sound from the woods. They went hunting about 45km from Sioux Lookout Ontario. Meekis decided to then capture it a video of the strange screams. He told the CTVNews, "Heard anything like this before. It was more bass-y than anything I’ve heard scream before." His grandson also tried to imitate the strange noises in one of the videos. Meekis mentioned that he thought it was a moose, while they mate but it didn't really match. Couple Kiss With a Massive Dead Lion They Killed to Show Off Their Trophy Hunting Skills in South Africa, View Shocking Pic!

Here's Another Video of the Scary Screams:

Both of these videos have gone viral and the screams have really scared some people. A lot of people commented that it could be a bear crying out in agony or in distress. Some people even made some supernatural guesses. Meekis is an occasional hunter and he tried to think of all the possible animals that are found in here, but he could not match any of them to the strange scream. Even the biologists from Ontario’s Ministry of Natural Resources and Forestry are wondering what it could be. Although they predicted it could be a wolf or a larger mammal, there is no way to be certain, what creature made that sound. The second video of screams sure sounds scary but guess we will never know what animal sounds like that.

(The above story first appeared on LatestLY on Nov 16, 2019 04:26 PM IST. For more news and updates on politics, world, sports, entertainment and lifestyle, log on to our website latestly.com).